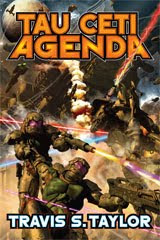 Travis S. Taylor is a physicist and when he uses science he doesn’t just give it a name, he also explains how it works.

I purchased The Tau Ceti Agenda from Baen as an E-Book and read it on my e-Bookwise reader.
Posted by JC Jones at 6:33 AM