Blaze of Memory by Nalini Singh 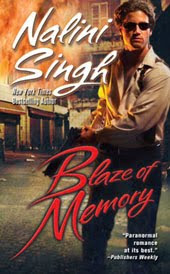 Blaze of Memory enlarges the world of Changelings, Psy and Humans. The Psy who did not embrace silence (the Forgotten) have been mentioned before but this is the first story that features a member of the Forgotten. Dev is the head of the Forgotten and is in danger of becoming as cold as the Psy that follow Silence. He finds a member of the Psy near death and dumped on his step. She cannot remember anything except the pain that one of the Psy inflicted. Dev knows that she must have been sent to harm him and other members of the Forgotten but he is still drawn to her. The two of them must fight to find a way out of the trap she represents.

While there are familiar Changelings characters in Blaze of Memory this is primarily a story of the Forgotten and the Psy and enlarges the world Nalini Singh has created in this series. Blaze of Memory is a complete story in itself adding a great addition to the series. At the same time it sets the stage for new books in the Psy/Changelings world.

Berkley published Blaze of Memory by Nalini Singh in 2009.

I purchased Blaze of Memory from Fictionwise. If you would like a 10% discount on this book at Fictionwise leave me your email in a comment.
Posted by JC Jones at 4:24 AM