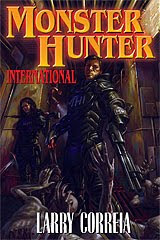 All Owen Zastava Pitt wanted was a normal boring life. That was why he became a CPA but now he was having a really bad night. He was working late when his boss transformed into a werewolf. In a fight for his life Owen managed to push his boss and his desk out of the fifth story window. Suddenly Owen found out that monsters were real. When he woke up in the hospital there were Fed’s threatening to kill him if he ever revealed what he had seen and Monster Hunter International offering him a job. That was the start of a new life and a wild ride for Owen and the other members of his team at Monster Hunter International.

I purchased Monster Hunter International from Borders.
Posted by JC Jones at 4:39 AM