Odd Girl Out by Timothy Zahn 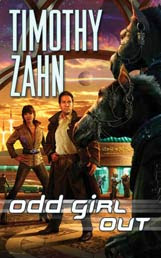 Like the first book most of the action in Odd Girl Out is on the Quadrail, the trains run by the Spiders that travel the galaxy. The Modhri, a group mind, is still the villain. Frank Compton and Bayta have stymied the Modhri plans twice. However, as the agents chosen to combat the Modhri they have to stop a new set of plans to take over the galaxy. They are like old style detectives and the action is fast and furious. Get on board for a great story and ride the Quadrail again.

TOR published Odd Girl Out by Timothy Zahn in 2008.

Night Trail to Rigel
The Third Lynx
Odd Girl Out
Posted by JC Jones at 4:47 AM