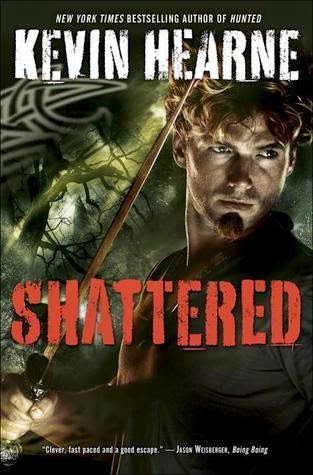 For nearly two thousand years, there was only one Druid left walking the Earth—Atticus O’Sullivan, the Iron Druid, whose sharp wit and sharp sword kept him alive while pursued by a pantheon of hostile deities. Now he’s got company.

Atticus’s apprentice Granuaile is at last a full Druid herself. What’s more, Atticus has defrosted an archdruid long ago frozen in time, a father figure (of sorts) who now goes by the modern equivalent of his old Irish name: Owen Kennedy.

And Owen has some catching up to do.

Atticus takes pleasure in the role reversal, as the student is now the teacher. Between busting Atticus’s chops and trying to fathom a cell phone, Owen must also learn English. For Atticus, the jury’s still out on whether the wily old coot will be an asset in the epic battle with Norse god Loki—or merely a pain in the arse.

But Atticus isn’t the only one with daddy issues. Granuaile faces a great challenge: to exorcise a sorcerer’s spirit that is possessing her father in India. Even with the help of the witch Laksha, Granuaile may be facing a crushing defeat.

As the trio of Druids deals with pestilence-spreading demons, bacon-loving yeti, fierce flying foxes, and frenzied Fae, they’re hoping that this time . . . three’s a charm

Shattered is another exciting adventure featuring 3 present day Druids.  Atticus’s apprentice Granuaile is now a full fledged Druid and now there is another Druid in the picture. Owen Kennedy has been on a time island for 2000 years and Atticus has just brought him into the 21st Century. So three Druids. Shattered is told in all three voices. We hear Atticus, Granuaile and Owen in different chapters. It is interesting but can be confusing at times. There are still battles to fight. Someone thinks that three Druids are three too many and Atticus and company find themselves in a pitched battle to survive. Loki is still around at least briefly and we can look for more of him in future books.  Each book builds on the previous book. Don't skip around or try to start anywhere but Hounded, book one.  This is a series that needs to be read in order so start at the first or be very lost.

I received a free copy of Shattered, The Iron Druid Chronicles from Amazon Vine.  DelRay will release Shattered by Kevin Hearne June 17, 2014.  You have plenty of time to pre-order.
Posted by JC Jones at 12:00 AM