The Complete Check Your Luck Agency by K.S. (Kaz) Augustin 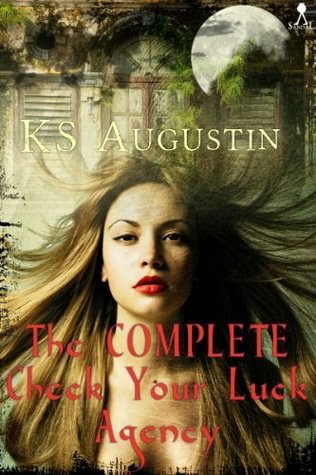 After the tragic death of her parents, and with nothing left tying her to the United Kingdom, Ursula Formosa returns to her homeland of Malaysia and a job with the eccentrically-named Singapore firm, “The Check Your Luck Agency”.

What begins as an attempt to stave off boredom turns into a new way of life as the scales drop from Ursula’s eyes and she tentatively enters a realm that contains vengeful ghosts, toyol, demons, pontianak and curses, not to mention old-fashioned fraud and larceny. As she befriends bomohs, mediums and a young woman already centuries old, Ursula’s ideas of friendship expand into a fresh view of the world that surrounds her.

But she isn’t going to be left to ease into things. A criminal mastermind, who is also a powerful sorcerer, is gathering mythical creatures to help him possess every living soul in Singapore, and he isn’t about to let the members of  The Check Your Luck Agency stand in his way!

I discovered K. S. Augustin’s books when I purchased my first e-reader and found her Science Fiction books at Fictionwise.  Both my eBookwise eReader and Fictionwise are long gone but I have stayed a Kaz Augustin fan.

While Kaz usually writes Science Fiction The Complete Check Your Luck Agency is different.  It is set in today’s world and is a paranormal mystery filled with both great human and paranormal characters.  Look for vampires that are different, a cat that is not what he seems, and many, many ghosts.  Those are just a few of the paranormal creatures that come to life in the book.

The setting is perfect.  Singapore is a cross roads for Southeast Asia.  It is very modern in some areas and not so modern in others.  There is a diverse population to draw from and right across the border is Malaysia to add even more to the mix.

The story is told in five parts each labeled a book (each about 100 pages).  Together they make a large book with some repeat as each section has back-story explaining what happened in the previous volumes.  There is a common threat to each part.  The characters grow and change, the plot becomes more complicated, and the world building more complex as each book progresses.

I loved the story and the characters.  It was fun watching Ursula change as she acknowledged there were things out there that most people could not see. My favorite character was Simon.  He is a ghost who is often with Ursula and causes her a more than a few problems.  While the end of The Complete Check Your Luck Agency handles the main threat there is room for the characters to return for more adventures.  I hope to see them all again soon.

Sandal Press published The Compete Check Your Luck Agency by K. S. Augustine in 2014.
Posted by JC Jones at 12:00 AM