Gameboard of the Gods (Age of X) by Richelle Mead 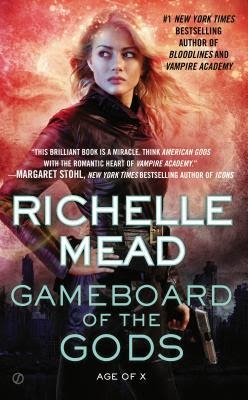 In a futuristic world nearly destroyed by religious extremists, Justin March lives in exile after failing in his job as an investigator of religious groups and supernatural claims. But Justin is given a second chance when Mae Koskinen comes to bring him back to the Republic of United North America (RUNA). Raised in an aristocratic caste, Mae is now a member of the military’s most elite and terrifying tier, a soldier with enhanced reflexes and skills.

When Justin and Mae are assigned to work together to solve a string of ritualistic murders, they soon realize that their discoveries have exposed them to terrible danger. As their investigation races forward, unknown enemies and powers greater than they can imagine are gathering in the shadows, ready to reclaim the world in which humans are merely game pieces on their board.

Gameboard of the Gods, the first installment of Richelle Mead’s Age of X series, will have all the elements that have made her YA Vampire Academy and Bloodlines series such mega successes: sexy, irresistible characters; romantic and mythological intrigue; and relentless action and suspense

As the first of the Age of  X series Gameboard of the Gods has to develop many different elements.

World Building – This is a world that geographically the same as ours but politically is very different.  Most of those differences are show up as part of the story line but some are grey areas. To help with those there is a glossary in the back of the book.

Back-Story – Both the world and the characters arrive in the story with varied histories.  Much of the character’s back story arrives as a flash back.  The back-story for the world is folded into the action and the dialog.  For the two main characters, Justin March and Mae Koskinen, their back-story is a mystery for much of the book.

Character Development - Both Justin March and Mae Koskinen are in the story from the beginning.  Both immediately showed two sides to their characters.  That was just a hint on how complex they were and how hard it was to read either.  To make it more complicated many times their actions were at odds with their true character.  The gods that are trying to come back into the world influence both of their actions.  Those same gods are important characters but much of their character stays a mystery.  There are some very well developed side characters that aid in the plot.  Several are not at all what they seem.

Plot -  It seems simple enough but as the book progresses it grows more and more complex.  It starts with murders that take place in a locked room but as Justin looks at the victims he finds that each has the same secret in their background.   The plot does take Justin and Mae into many different part of the Republic of United North America aiding in both world-building and character development.

Writing – This is my first time to read a book by Richelle Mead.  I found Gameboard of the Gods to be very well written.  Dialog and action kept the story moving and needed facts were folded in exactly when needed.  All in all a well developed story.

Book two The Immortal Crown has already been released and it will be going on my TBR pile very soon.

Signet Fantasy published Gameboardof the Gods by Richelle Mead in 2013.
Posted by JC Jones at 1:30 AM