The Guild of Assassins: Book Two of The Majat Code by Anna Kashina 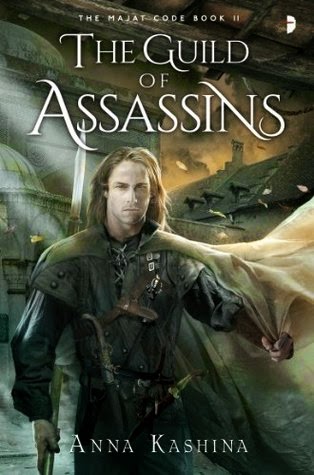 Kara has achieved something that no Majat has ever managed – freedom from the Guild!

But the Black Diamond assassin Mai has been called back to face his punishment for sparing her life. Determined to join his fight or share his punishment, Kara finds herself falling for Mai.

But is their relationship – and the force that makes their union all-powerful – a tool to defeat the overpowering forces of the Kaddim armies, or a distraction sure to cause the downfall of the Majat?

While some things were resolved in Blades of the Old Empire many were not.  In The Guild of Assassins those unresolved issues are at the heart of the story. While there is a lot of action in The Guild of Assassins the characters really drive the story.  Mai, Kara and Kyth seem to be locked into a hopeless love triangle with Kara at the center.  Their reactions as they have to work together as they try to defeat the Kaddim are a large part of what is driving the story.

Anna Kashina has added to the intricate world building started in the first book.  There is much to learn about the Majat and over the course of the book much more is woven into the story.  She has also shown facets of the characters that were previously hidden.  The plot itself is an extension of the action in Blades of the Old Empire and follows a path that does not always go where I expected.

I felt that I knew more about both the world and the characters after reading The Guild of the Assassins.  What made it so enjoyable was that all that knowledge was wrapped up in an exciting story that was difficult to put down.  While the book came to a very satisfying conclusion there is much more story to be told.  Read Anna’s guest post (click here) to see what she has to say about the plans she has the world of the Majat.

Read Blades of the Old Empire first.  It will make the story in The Guild of the Assassins much better.

Angry Robot will release The Guild of the Assassins by Anna Kashina in August of 2014.

I received an ARC of The Guild of the Assassins from Netgalley.