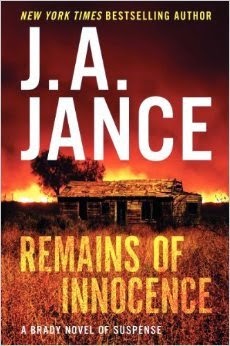 Sheriff Joanna Brady must solve two perplexing cases that may be tied together in New York Times bestselling author J. A. Jance’s thrilling tale of suspense that brings to life Arizona’s Cochise County and the desert Southwest in all its beauty and mystery.

An old woman, a hoarder, is dying of emphysema in Great Barrington, Massachusetts. In cleaning out her house, her daughter, Liza Machett, discovers a fortune in hundred dollar bills hidden in the tall stacks of books and magazines that crowd every corner.

Tracing the money’s origins will take Liza on a journey that will end in Cochise County, where Sheriff Joanna Brady is embroiled in a personal mystery of her own. A man she considers a family friend is found dead at the bottom of a hole in a limestone cavern near Bisbee. And now there is the mystery of Liza and the money. Are the two disparate cases connected? It’s up to Joanna to find out.

Remains of Innocence starts in Massachusetts and ends in Cochise County Arizona.  Once again Jance has done a superb job of weaving two different crimes into one tension filled story.  Joann Brady’s character just keeps growing.  More and more she is just what is Cochise County needs for their Sheriff.

William Morrow published Remains of Innocence by J.A. Jance in 2014.

I received an ARC of Remains of Innocence from Edelweiss.
Posted by JC Jones at 12:00 AM