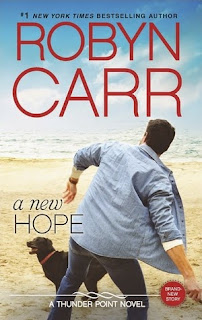 Starting over is never easy, but in Thunder Point, where newcomers are welcome and friends become family, it's possible to find yourself again. In this brand-new story, #1 New York Times bestselling author Robyn Carr takes us on a moving and rewarding journey as a young woman finds new hope.

After losing her child, Ginger Dysart was lost in grief. But since moving to Thunder Point, a small town on the Oregon coast, and with the help of her cousin Ray Anne, Ginger is finally moving forward. Her job at the flower shop is peaceful and fulfilling, and she's excited to start her first big assignment, assisting with the Lacoumette wedding.

In spite of her lasting heartache, Ginger finds herself swept up in the pleasure of the occasion. But the beauty of the Lacoumette farm and the joy of the gregarious family are ruined by an unfortunate encounter with the bride's brother, Matt. Struggling with painful memories of his own recent divorce, Matt makes a drunken spectacle of himself and Ginger when he tries to make a pass at her, forcing Ginger to flee the scene in embarrassment.

But when Matt shows up at the flower shop determined to make amends, what started out as a humiliating first meeting blossoms into something much deeper than either of them expected. Discovering they have a lot in common, they form a solid friendship, though everyone around them worries that Ginger will end up with a broken heart yet again. But if Ginger has the courage to embrace the future, and if Matt can finally learn to let go of the past, there may still be hope for a happy ending.

Both Ginger Dysart and Matt Lacumette are characters from One Wish, the previous book in the Thunder Point series.  Both have suffered a severe event in their lives that has left them injured.  We do know what happened to Ginger and I could guess what happened to Matt long before he told Ginger what was causing his pain.

I loved both characters.  After a very long period of depression Ginger is working hard to start a new life.  Matt starts out as a real looser but quickly turns a page as he and Ginger become friends.  Carr has the nack of creating really wonderful settings and characters and in A New Hope she has done it again.  The problems and tension in the story seem so real and just drew me in.  There is a side story and a new very interesting character whose problems are left hanging.  I am hoping that is the hook for the next book in the series.

A New Hope is a very good addition to the series.  As always we do get to see some of the characters from previous books but the further from their stories we get the less we see of them.  That is always a disappointment.  The stories and characters seem so real that I always want to know how everyone from previous books are getting along.

Mira published A New Hope by Robyn Carr in 2015.

I received an ARC of A New Hope from Netgalley in return for an honest review.
Posted by JC Jones at 12:00 AM