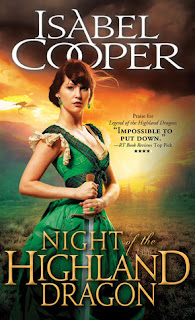 William Arundell is a detective working for a secret branch of the English government. When a young man is found dead, William’s investigation leads him to a remote Highland village and the intoxicatingly beautiful lady who rules MacAlasdair Castle.

The charismatic Judith MacAlasdair is not what William expected. The only daughter in a long line of shape-changing dragons, Judith is wary of William and his unrelenting questions. However, when William’s investigation takes an interesting turn, they must put aside years of bad blood and a mutual distrust of outsiders to band together to save the British Islands from its deadliest foe.

Night of the Highland Dragon has two very interesting protagonist.   Neither are that young.  In fact Judith MacAlasdair is 180 years old even though she looks like she is in her twenties.  William Arundell is not that old but he is around forty.  They make a great pair.

The Highland Dragon series takes a slightly different approach to the paranormal.  It mixes the historical with the paranormal and the mix works.  While Judith is a dragon you see her more in her human form.  The mystery is front and center and allows both Judith and William time to become very well developed characters.  That is important as this is a character driven story and it takes two very strong people to pull everything off.

The world building is great and there is enough back story to let you know the history of Judith and the village where she lives.  William also has some back story but the agency he works for is more of a shadow than a reality.

I did wonder how they would get their HEA.  Judith is so long lived and William is a normal human but Cooper found a very elegant way to make their romance possible.  Night of the Highland Dragon is a great addition to the series and like books one and two features a great plot, good writing and wonderful characters.

Night of the Highland Dragon is book three in the series but it does a great job as a stand alone.  If you start here you will want to go back and read books one and two.  They feature Judith’s two brothers.

Sourcebook Casablanca published Night of the Highland Dragon by Isabel Cooper in 2015.

I received an ARC of Night of the Highland Dragon in return for an honest review.
Posted by JC Jones at 12:00 AM