The Major's Faux Fiancee by Erica Ridley - The Major’s Faux Fiancee uses the false engagement as the main plot point.  The story develops from there.  It turns out that Daphane and Bartholomew both have things they need to learn about themselves.  Ridley does a great job developing the plot that leads up to each making the discovery they each need to live life to the fullest.  It makes for an interesting journey for both.

What does not take long is each discovering that they want the engagement to be real.  Of course neither will tell the other keeping the tension high and the romance at a simmer.  It was nice to meet the characters from the previous stories.  This is part of The Dukes of War series but will stand-alone.  For more fun pick up the other books if you have not already read them.

Shards of Hope by Nalini Singh - While this is Aden and Zira’s story it also sets the political stage for future books.  There are some new characters and a new leopard pack.  RainFire shows up early in the book and Remi the alpha looks like a great new main character.  Look for JoJo who steals the show from everyone else.  There are also many new and unexpected changes for the Arrows.  This is book 14 in the series and it looks like there could be that many more.

Knight's Shadow by Sebastian De Castell - I loved Traitor’s Blade book one in the Greatcoat’s series.  Knight’s Shadow did not disappoint.  Just like book one Knight’s Shadow was full of surprises.  This is an action driven series and the action is non-stop.  So are the surprises.

There is the same cast of characters lead by Falcio Val Mond and the acition revolves around each.  Some are what they seem but some provide some of the surprises in the plot.  About the plot – some things have been revelaled but there is much that is left for future books.  The danger is not over and the tension is still building.  This is a four book series so there is more to come for Falcio and the Greatcoats.

Forget Me Not by Erika Marks - What happens when your writing career is not what everyone expected? Mallory Reynolds has just found out. It puts her back in the same town as Josh Loveless, the one she left behind. Or was it the one who did not fight for her. A nice sweet romance about second chances. Some sex but not too much. More about how you feel about decisions you made years ago.

Kiss Me by Susan Mallery -  What happens when you mix someone who tries to save everyone with someone who really needs saving.  Well if you put them on a ranch, mix in tourists and a cattle drive you get romance.  Zane Nicholson was mentioned in the previous Fools Gold book and Phoebe Kitzke is a new character.  They should not be a mix.  Zane is a down to earth rancher and Phoebe talks to the animals.  She does admit that they do not talk back.  They are both great characters and it turns out that they are a perfect mix.  Since the setting is a cattle drive on a ranch there are not that many previous Fools Gold characters but there are several set ups for more stories. 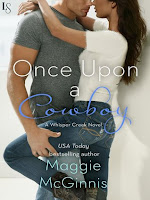 Once Upon a Cowboy by Maggie McGinnis - This is the third Whisper Creek book I have read and this time it is Jessalyn Alcott’s time to find romance.  I loved both Jessalyn and Cole Driscoll.  Jessalyn has a secret.  In fact she has several and we get to see them in flashbacks.  Cole has always been a player but for some time he has been ready to settle  down.  He realizes that Jess has something in her past that scares her and he is taking it very slow.  This is a very good story about how the past can affect the future.  It also speaks to the kind of abuse that some women suffer.  A great addition to the series and all the characters at Whisper Creek.

The Silver Ships by Scott Jucha - This is the authors first published story and it shows great promise.  The story starts with a familiar theme. From there it develops into its own original movement.  I could see the planning.  The plot is very well developed and the characters are interesting.  It is a tension filled and character driven.  This is the start of a series and while there is the start to a solution to the danger there is much more to be done.  The book ends on a tease. I am waiting for the next books to see how the adventure will continue.

The Silver Ships is self-published.  There were places where I felt it needed additional editing.  Some things needed more attention and some things could have been cut.  Even so I enjoyed reading it.

Wicked Ride by Rebecca Zanetti – I loved the Sin Brother series by Zanetti and when I saw she was starting a new series I had to give it a try.  What I didn’t know was that this is a spin-off from another series.  Once again there is a strong alpha male and a very strong female who strike sparks and lust when they meet.  The plot centers around a new drug on the street, a drug that is killing people. The two main characters are Alexandra and Kellach and both are trying to find the source of the drug.  However they are often working at cross purposes.  While this is book one in Realm Enforcers the back story and world building was done in a previous series.  Zanette does a good job of filling in the blanks but there were times I knew I was missing something.  Wicked Ride does stand alone but I think I would have enjoyed it more if I had read the previous series.

Twelve Days By Alex Berenson – John Wells has 12 days to stop a war.  This is book #9 in the series and the first one I have listened to or read.  This is a true series where one book follows the next with a cliffhanger ending.  Set in the present there is a lot that could really happen.  Expect non-stop action and lot of tension and some interesting characters.  The book just ends without letting the reader guess what will happen next.  I will find out in the next book which is not out yet.

Dirty Magic (Prospero’s War #1)  by Jaye Wells – A great start to a new series.  The world building works right into the plot, the characters are developed and interesting and everything builds on back-story and previous relationships.  The danger and tension build as the story progresses.  Some things are solved and some things are left for the next books.

I loved the characters and their interactions.  This is trilogy so I will get to see more of them and more action and danger.
Posted by JC Jones at 1:00 AM