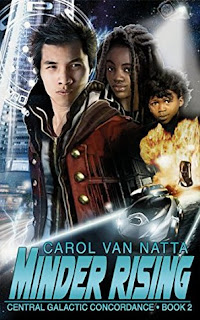 A millennium into the future, all children are tested for minder talents, and the best are recruited for the Citizen Protection Service.

Agent Lièrén Sòng is recovering from a near-fatal crash. He should want nothing more than to get back to using his talents to interrogate criminals for his covert CPS field unit, but being sidelined gains new appeal when he makes friends with a woman and her son. Imara Sesay, road crew chief and part-time bartender, breaks her ironclad rule never to get close to customers when she asks Lièrén to teach her son how to control his growing minder talents.

Unexpected deaths in his field unit make Lièrén suspect he isn’t a lucky survivor, he’s a loose end. He should pull away from Imara and Derrit to keep them safe, but when the local CPS Testing Center is entirely too interested in Derrit’s talents, Lièrén must make an impossible choice. Can he stay alive long enough to save Imara and her prodigy son?

Minder Rising is a great new story written by Carol Van Natta.  The setting is in The Central Galactic Concordance, her interesting Science Fiction Romance series.  Minder Rising is set in the same world as OverLoad Flux but it works very well as a stand-alone.

I loved the characters and how their inter-action moves the story along.  Lieren Song does not start as that strong a character.  He seem to be just drifiting along as he recovers from a near fatal accident.  Things change as he becomes involved in the lives of Imara Sesay and her son Derrit.  He quits drifting and becomes involved in a way he would have never expected.

Imara Sesay is a strong chracter from the beginning.  Her son is her big concern and when she asked Lieren for help the lives of the three become very intertwined.  There are also some very interesting side characters that also help drive the story.

Minder Rising is character driven.  The characters and their actions make this to a story filled with danger and tension.  As the story progresses secrets come out, betrayals are revealed  and both Imara and Lieren start to question how they want to live their life.  The story starts slowly and builds to a fast pace by the end.  It kept me reading and unable to put it down.

There is romance but it is the slow burning kind. I loved how the story kept throwing Lieren and Imara together and the romance grew from there. Neither acting on the attraction adds to the tension.

Both Lieren and Imara have back story and there is a need for world building.  Each are smoothly woven into the story as needed.

Book 3 is coming out in the fall of 2015.  According to the author some of the characters from book 1 will reappear so if you have not read OverLoad Flux you might want to pick it up next.  I do know tht you don’t want to miss reading all the books in the series.

I think Van Natta is a rising star in the Science Fiction Romance world.

Minder Rising by Carol Van Natta was published in 2015.

I received an ARC of Minder Rising from the author in return for an honest review.
Posted by JC Jones at 2:00 AM