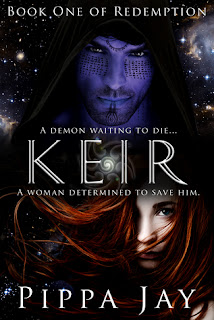 A demon waiting to die...
An outcast reviled for his discolored skin and rumors of black magic, Keirlan de Corizi sees no hope for redemption. Imprisoned beneath the palace that was once his home, the legendary 'Blue Demon of Adalucien' waits for death to finally free him of his curse. But salvation comes in an unexpected guise.

A woman determined to save him.
Able to cross space and time with a wave of her hand, Tarquin Secker has spent eternity on a hopeless quest. Drawn by a compulsion she can't explain, she risks her apparent immortality to save Keir, and offers him sanctuary on her home-world, Lyagnius. But Quin has secrets of her own.

When Keir mistakenly unleashes the dormant alien powers within him and earns exile from Lyagnius, Quin chooses to stand by him. Can he master his newfound abilities in time to save Quin from the darkness that seeks to possess her?

Keir is a fast paced tension filled book.  It is Science Fiction Romance but the romance element is allowed to develop as the story progresses.  The same is true for the character development.  Both Keir and Quinn continue to develop as the story progresses.  What both are like at the beginning of the book is very different from what they are like at the end.

Keir is set in a very complex world with a lot of back-story required for the story to work.  The plot development allows each to come to light as needed.  The plot itself is complicated.  It feels like one thing (Saving Keir) at the beginning and becomes something else entirely half way through the book.  That change intruded on the story at first.  Several characters and a new world seemed to come out of nowhere without the lead up I would have liked.  Once I got past that the story again progressed in a smooth and believable manner.

I had read parts of Keir before but not the entire book.   I don’t know where or why but it may be because Keir is a re-release from 2012.  I do know I had not read the entire book.

Keir is book one in the Redemption series and book 2 is due out shortly.  That is probably the reason for doing a new release.

Keir is a great read for all SFR fans.

I received an ARC of Keir from Netgalley in return for an honest review.
Posted by JC Jones at 12:00 AM