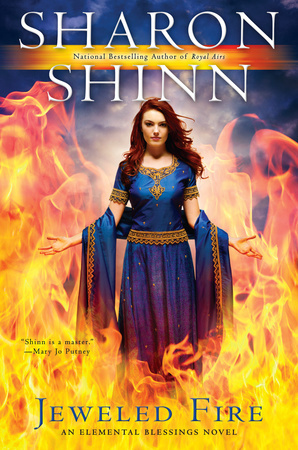 Fantasy
From Goodreads:
The national bestselling author of Troubled Waters and Royal Airs returns to her Elemental Blessings series with the story of a young princess who will need more than blessings to survive in a kingdom where everyone will do whatever it takes to claim the throne…

As one of the four princesses of Welce, Corene always thought she might one day become queen. Only circumstances changed, leaving fiery Corene with nothing to show for a life spent playing the game of court intrigue—until a chance arises to become the ruler of a nearby country.

After stowing away on a ship bound for Malinqua with her loyal bodyguard, Foley, Corene must try to win the throne by making a play to marry one of the empress’s three nephews. But Corene is not the only foreign princess in search of a crown.

Unaccustomed to being anyone’s friend, Corene is surprised to find companionship among her fellow competitors. But behind Malinqua’s beautiful facade lie many secrets.

The visiting princesses are more hostages than guests. And as the deadly nature of the court is revealed, Corene must rely on both her new allies and Foley’s unwavering protection—for the game she has entered is far more perilous than she ever imagined.

Once again Shinn has written a love story that simmers in the backgound.  Corene and Foley are a great pair who have to respond to multiple threats.  Nothing is as it seems.  Does the empress really want to marry off her nephews?  With three old choices and one new choice who will actually be the heir.  Who is pulling strings in the background to see that their candidate wins.  Why is one of the princesses in more danger than the other two.

All of this is happening in a book that is full of tension even as the prose flows in a very smooth way.  Shinn had a way with the gentle romance.  You know that the two are attracted but it is never shoved in your face.  Instead there are hints in the action required by the two main characters.

Jeweled Fire is character driven.  Corene, the main character, starts out not knowing what she wants from her life and ends up realizing that running way leads her to being able to run to a new and interesting life.  Best of all Foley will be sharing that life with her.

Jeweled Fire is book three in the Elemental Blessing series but works well as a stand alone.

I received an ARC of Jeweled Fire from Netgalley in return for an honest review.
Posted by JC Jones at 12:00 AM