Jason Werbeloff’s short stories have been downloaded over 20,000 times. Obsidian Worlds brings together his 11 best-selling sci-fi shorts into a mind-bending philosophical anthology.

In Your Averaged Joe, a man’s headache is large enough to hold the multiverse. Q46F is an obsessive-compulsive android who finds love in a zombie-embroiled apocalypse. The end of the world isn’t all that bad – The Experience Machine will fulfil your every desire (and some you hadn’t considered). A sex bot dares to dream of freedom in Dinner with Flexi. But mind what you eat, because The Photons in the Cheese Are Lost. Don’t fret though: The Cryo Killer guarantees that your death will be painless, or your money back when you’re thawed. Unless, that is, you’re The Man with Two Legs.

Plug into Obsidian Worlds for these and other immersive stories, including the hilarious Time-Traveling Chicken Sexer. Your brain will never be the same again.

(from Your Averaged Joe):

“Sorry, this is a bit overwhelming. Let me introduce myself.” Then all three men spoke in unison, extending their hands, “I’m Thursday.” They each chewed a piece of gum, their masticating movements simultaneous.

Joe eyed the identical hands. Long, frosty fingers. Whitest skin. He shook hands with each. Their grips were firm. All three.

Thursday continued, “This is the Chamber.” He waved his arm around the room proudly. Joe considered the space. The rows of beds seemed to stretch forever. He couldn’t see the end of the room. And no pillars. Nothing to support the pink ceiling that extended in all directions. Joe scrunched his feet at the enormity of the Chamber, and the floor squeezed between his toes. But the floor wasn’t smooth – it was … hairy? He glanced down, and yup, fine dark hairs covered its surface. It was like standing on a forearm. Goose bumps erupted along his arms, down his legs, Joe shifted his weight to his heels, trying to avoid the hairs from scratching between his toes. And as the goose bumps spread across his back, down his chest, the ground beneath his feet changed. Between the silky black hairs, the fleshy floor lumped in places. Lumps the size of fists. Bumps, goose bumps. On the ground. He shivered.

Trying not to think about it, and resisting the urge to jump, to get his feet anywhere but on the fleshy floor, he stared at the beds. Each held a single occupant, each with brown hair, each wearing the same pale blue nightgown he was wearing. Joe looked to the bed beside his, and his heart stopped.

The man in the bed was him. 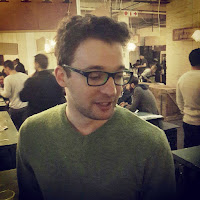 Jason Werbeloff is a novelist and philosopher. He loves chocolate and his Labrador, Sunny.
He's interested in the nature of social groups, personal identity, freedom, and the nature of the mind. His passion is translating philosophical debate around these topics into works of science fiction, while gorging himself on chocolate.

Newsletter – subscribe to get 'The Solace Pill' free, as well as VIP access to Werbeloff's latest fiction.
http://smarturl.it/werbeloff

Website - read about the author, and the philosophy behind his fiction.
http://www.jasonwerbeloff.com/

Jason will be awarding a $15 Amazon or B/N GC to a randomly drawn winner via rafflecopter during the tour.