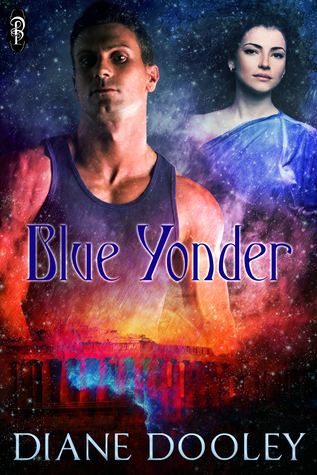 Earth is drowning, but Isabel Visconti won’t be going down with the planet. Her earnings as a factory drone and prostitute will soon fund her escape to the stars. All she’ll leave behind is her late husband’s best friend, Daniel Morneau, who has disappeared into the underbelly of the city’s criminal gangs. Until he shows up, pleading for Isabel’s help.

It’s the old Daniel, the kind, gentle one. The man who bought medicine for her dying husband then helped her through the grief. It’s the Daniel she couldn’t possibly refuse to help. But Isabel has already been given a choice by Daniel’s psychopath boss. Betray Daniel—or spend months travelling to a far-off colony, servicing a violent criminal gang along the way.

When Daniel is abducted, Isabel is his only hope. He may die without her, but is there time enough for love on the eve of the end of the world?

At only 45 pages long Blue Yonder is a short story but one well worth reading.  Both Isabel Visconti and Daniel Morneau are great characters who have a past but have been apart for a long time.  Then a baby comes into the picture and they re-connect.  I liked both Isabel and Daniel but the scene-stealer is baby Jack.  There is a lot of action, tension and romance in this very well-written story.  I loved the surprise at the end.  I would love to see a follow up to the surprise set later in the lives of Isabel Daniel and Jack. (Just a hint:  Wanting more is the sign of a very good story.)

I received a copy of Blue Yonder from the author in return for an honest review.
Posted by JC Jones at 12:00 AM