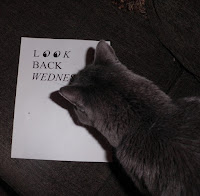 LOOK BACK WEDNESDAY IS A FEATURE HERE ON MY BLOG.  I DECIDED TO  FEATURE BOOKS FROM DIFFERENT SHELVES ON GOODREADS.  SOME HAVE BEEN FEATURED ON MY BLOG AND SOME HAVE NOT.

Touch of Power by Maria V. Snyder, Maria V.
My rating: 4 of 5 stars

Avry of Kazan is a healer. She can take the pain, wounds and diseases into her body healing the patient. While they cause her pain she recovers to heal again. She should be honored but instead she is hunted. A plague came through the land and healers died if they tried to cure plague victims. People did not understand why healers refused to cure plague victims. Instead they decided that healer had spread the plague and most had been killed. Avry has been hiding and moving for years trying to survive. When she is finally captured and sentenced to death she is saved by a band of rogues who value her gift instead of wanting to kill her for having. The catch is that they want her to heal a leader who has the plague, a leader she hates and one she really does not want to die for.

Touch of Power is the first book in the Healer series and while some things are resolved, many are not. I started reading and had trouble putting Touch of Power down. I liked most of the characters. Avry was a strong powerful character. I liked the supporting characters. The one I did not like was the lead male, Kerrick. I never like a man who abuses a woman and in the first part of the book Kerrick was very abusive to Avry. Avry had tried to escape but I just could not see Kerrick as anything but a man who abused his power and for me he was not a very good hero. I will still be looking for book two.