Ellis Morning is here today to share a excerpt from her new book Harbingers and a guest post on world building.  Great to have you here today.  Science Fiction/Fantasy books are my favorite.
~~~~~~~~~~~~~

The Quest Continues To Stop A Killer "Curse!"

Dame Jessamine is a knight errant with a spaceship for a steed, a woman of science in a galaxy rife with superstition. Follow along as she continues her mission for truth within the barony of Nidaros!

A mysterious crop-withering blight spreads through the barony's soil. The court magicians have blamed two siblings of spawning the crisis through witchcraft. Convinced of their innocence, Jessamine has rescued and now secretly harbors Verahl Naustvik aboard her spaceship. Meanwhile, his sister Thordia flees to the Harbinger, a crashed space station from the distant and more enlightened past.

Approaching the Harbinger is an act punishable by death, but Jessamine won't let that stand in the way of a second rescue. Thordia, and the Harbinger's surviving technological secrets, may be Nidaros' only hope against the blight. Jessamine prepares to embark—only to be betrayed and set upon by vengeful court magicians.

Now, one wrong word or gesture will lead to deadly charges of witchcraft. Jessamine must protect the Naustviks and brave the Harbinger, all while striking a balance between ritual and reason. If she can't maintain the peace long enough to discover a cure for the blight, the entire barony will starve—unless its far-off masters decide to "restore order" with military action first!

Harbingers is Book Two of the Sword and Starship series of science fiction/fantasy adventure.

Outside the barracks, Ingvar, Pontus, and I stared out into the starry night. Colorful flashes pierced a single point in the sky at irregular intervals—some strong, others flickering. Some were as short-lived as fireflies, easy to miss if one weren’t looking directly at them. Most were green and orange, with the occasional burst of red.

I held my breath while puzzling over the matter. Stellar phenomenon, meteor shower? No, it seemed much closer than that. Explosives? But silence reigned in their wake. Ingvar and I had found the Naustviks’ house full of Shipbuilder holograms and lighting devices. Could this be more of the same, wielded by adepts or others with adequate knowledge? But usually, such objects and knowledge were rare.

There was a more mundane possibility: fireworks. Metal salts like calcium chloride, ground into a powder and introduced to fire, burned up in a dramatic display of color. My mentors at the Enduring Flame Beguinage had introduced me to tricks like that, specifically labeling them tricks. Adepts performed such stunts, too, but called them “magic.”

At my side, Ingvar frowned. “They seem to hover right over the capital buildings.” He referred to the three Shipbuilder structures at the core of Nidaros’ capital: the Baron’s estate, the adepts’ keep, and the storehouse.

“Unseen. Never thought …” Pontus trailed off nervously. He stood ahead of us, his reaction invisible.

“Pontus?” Ingvar prompted. “Is there something I don’t know about?”

The lieutenant faced us, fists clenched at his sides. The right one slowly ground his wishing beads into dust. “Last week, the boys on night watch whispered about a vision like this. They convinced the next night’s shift to be on the lookout, but it never repeated itself. Forgot about it until now.”

“We know not to bring you a ghost tale unless we have the ghost on a leash, sir.” Pontus tossed his head over his shoulder. “Is that close enough?”

Ingvar scowled toward the flashing lights again, saying nothing.

Whole books could be devoted to the art of world-building. It’s something you continuously improve through practice, always getting better but never quite becoming a master. Having marvelous ideas is one part, but then you need to convey those ideas in a clear and compelling way.

It’s not just the raw ideas, either. “Cows don’t exist!” “Gravity on this planet is only half of Earth’s!” OK, but you must think deeper than that. For every aspect of your universe, you should ask yourself at least two questions:

1. WHY is it this way? There must be a reason for it, even if it’s never explained to the audience. Let’s follow the half-gravity example I threw out above. On the basis of pure physics, a planet the size of Earth, that looks and feels and is made up of the same stuff that Earth is, can’t have lower gravity unless something else is going on. You’ll have to make the planet smaller, compose it of different elements, or invent some sort of technology or magic that’s causing the effect. Oh—the laws of physics are totally different in your universe? Well, now you have much more to research and think about. See how one small detail can spiral out of control? :)

2. What are the consequences and implications? Here’s where you can wring out a ton of world-building detail, by following your assertions to their logical ends. For instance, how does half-gravity affect the denizens of your planet? If they’re human, they may be taller and have lower bone density than average. They’re probably more prone to breaking limbs when they fall. How does lower gravity affect how plants grow, and how buildings are designed and constructed? And so on. There are potential plot, setting, and character ideas here. You probably won’t communicate all of this detail to the reader, but you have it in your back pocket and can build on it. Or, you may realize that your half-gravity idea just isn’t feasible for the story you want to tell.

The best way to ease your readers into an unfamiliar setting is by doing lots of planning up front, and constructing a universe that stands upon a firm logical foundation. Take notes on this stuff and keep them handy as you write. SHOW detail and implications wherever you can. Readers will appreciate world-building details that have been carefully thought through more than flashy ideas that are just thrown out there mindlessly.

Thanks so much for reading! Please feel free to leave me your comments and questions, or read more at my blog: http://ellismorning.com/blog/ 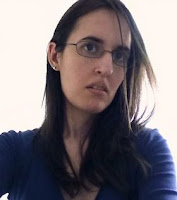 Ellis has always loved staging adventures in her head before going to sleep each night. When she was twelve, she started putting these adventures on paper.
For the next twenty years, she wrote with varying degrees of seriousness, but always as a hobby. In that time, she fell in love with Mark Twain and Kurt Vonnegut, the original Star Trek series, and Mystery Science Theater 3000. Science fiction became her favorite domain to work in, but she also enjoyed reading fantasy, horror, Western, and detective stories, and incorporating their elements into her work. One of her favorite things to do was make people laugh.

Ellis denied being a writer for decades. But then she sold articles to The Daily WTF, and a short story to Analog Science Fiction and Fact. After quitting her full-time job to finish her first novel, it was time to own up to writing as her calling. She's currently an editor at The Daily WTF, and having the time of her life penning novels and short stories.

Ellis Morning will be awarding a $20 Amazon or Barnes and Noble GC to a randomly drawn winner via rafflecopter during the tour.

Thanks so much for hosting me, and thanks to everyone reading this post! Please feel free to leave any comments or questions you may have. I plan to stop by later this evening to answer any comments that come in. Thanks again! :)

Great World Building post. I always love a story with good world building. I have been disappointed when the plot and characters are great but the world building just does not make sense. It ruins a good story.

Thanks for hosting. This was a very interesting post--so much imagination that goes into creating a book!

Congrats on the book tour. I hope that I win. This looks like a fun read. Bernie W BWallace1980(at)hotmail(d0t)com

Have a great weekend :)

Thanks so much, JC! I agree, you must do everything possible to make the setting believable!

Just stopping by to say hi! Hope you have a fabulous weekend!

Thanks for taking the time to thoroughly outline your process.

Congrats on the book tour. I hope that I win. This looks like a fun read. Bernie W BWallace1980(at)hotmail(d0t)com