When the people of Barit first saw the silver glint of sky craft, they felt awe. Then awe turned to fear. And they found a name for the mysterious newcomers. Sky raiders.

Garek's one year of duty as a guard walking the walls of Garamundo was extended to two when the sky raiders appeared. Two long years away from home and his lover, Taya. When he finally returns, the town is empty. While Garek was protecting Garamundo, the sky raiders were taking their victims from his hometown.

Taya can't bear looking into the night sky. All she can see is Barit, her home planet. Impossibly, the sky raiders have brought her and their other victims to Shadow, the planet that shadows her own, and looking up makes her aware of everything she's lost. Garek is out there somewhere. She knows he'll look, but he'll never find her.

She and the other captives have to find a way to escape. Without the food and clothes the sky raiders bring them from their raids on Barit, they'll starve on the almost barren wastes of Shadow. And when they've given the sky raiders enough of what they want, that's exactly what the sky raiders will leave them to do.

What Taya doesn't realize is she'll have some help with her plan. Because Garek isn't giving up on finding her. And he's even more resourceful than she could ever have imagined.

Nothing is going to keep him from Taya. Not even space itself.

He'd asked her to wait for him, and then he'd disappeared for two years.

As he reached the top of the pass and started down the steep path to the valley below, Garek wondered just how angry Taya would be.

That she would be angry enough to have taken someone else sat like week-old loaf in his stomach, heavy and sickening.

He'd had no choice, had come as soon as he could . . . he tried to shake off the chill that touched him, despite the bright day. He'd take her anger, her fury--he'd take it all if it meant he didn't find her with someone else.

He forced himself to pay attention as the path became steeper still, and frowned at how badly maintained the way had become, as if no one had repaired the damage a winter in the mountains could do to a narrow track. The spring thaw had come and gone, replaced by a golden summer, and the snow had retreated to the tops of the mountains.

Kas should have done something about the erosion by now, even though this path was a shortcut few besides the villagers knew of, cutting across the Crag and shaving hours off the journey through the foothills.

The familiar landscape tugged at something inside him. He hadn't thought himself sentimental, and though he'd missed Taya with an ache that hurt worse than a knife to flesh, he hadn't thought the sight of the rolling hills and high peaks would affect him. The crowds and enclosing stone walls of Garamundo had been something to bear stoically, but he was surprised how easy it was to breathe here, and it wasn't just because the air was sweet with the scent of summer grass.

When he'd left two years ago, the only thing he'd regretted was leaving Taya behind him, and he'd come back only to fetch her.

Fetch her and run, as fast as possible.

I gave Sky Raiders 5 stars on Goodreads.  Here is my review:

This is an unusual set up for a science fiction story. It starts on one planet then moves to another. The unusual part is the fact that the first planet does not have much in the way of technology and the main character has to figure out how to steal a ship and find the people who have been taken to a another planet. It is filled with danger and very ingenious solutions to problems. Throw in a love interest who needs to be rescued and you have an even more complex plot. A interesting and fun addition to the Science Fiction Romance scene. 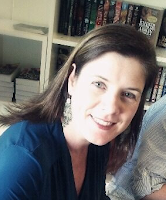 Michelle Diener is the author of the bestselling, award-winning Class 5 series. She writes historical fiction, science fiction and fantasy and loves creating new worlds for her and her readers to escape to. She lives in Australia with her husband and two children.

Michelle Diener will be awarding a $20 Amazon/BN GC to a randomly drawn winner via rafflecopter during the tour.

Be sure to visit all the blogs on the tour for additional chances to win.


May 23: Deep in the Crease
May 23: Mixed Book Bag
May 30: The Avid Reader
May 30: The Reading Addict
June 6: Books, Dreams,Life
June 6: Booklove
June 13: Fabulous and Brunette
June 13: Sharing Links and Wisdom

Thanks so much for the wonderful review and for hosting Sky Raiders today :)

I enjoyed Sky Raiders and love hosting you on the blog tour. Looking forward to the next book.

I enjoyed Sky Raiders and love your review!

I love this cover, thanks for sharing!

This sounds like a very good read thank you for the hosting.

great excerpt, thanks for sharing.

The book sounds very intriguing, thank you for the reveal!

Shared on G+ to help spread the word, have a great day! :)