Betrayed by her own prodigy, Eolyn stands accused of treason. As power-hungry nobles dismantle her life's work and honor, the desperate queen forges a risky alliance with the ruthless and cunning Mage Corey. Determined to defend her son's claim to the throne of the Mage King, Eolyn prepares for her last and greatest battle, this time against her own sisters in magic.

Across the Furma River, Taesara of Roenfyn is drawn out of seclusion and into an ever-more vicious game of intrigue and war. Subject to the schemes of a shrewd uncle and the mysterious ambitions of the wizards of Galia, Taesara struggles to assert her own destiny, even as she takes up arms to defend her daughter's inheritance.

In the climactic finale to The Silver Web trilogy, threads of love, honor, betrayal, and vengeance culminate in a violent conflict between powerful women, opposed to each other yet destined to shatter a thousand-year cycle of war.

"A tale of female oppression, prejudice, and even deadly seduction, EOLYN touches on issues that are deeply relevant to our own society." -Apex Reviews review of EOLYN, Book One of the Silver Web

“Speak plainly, my Lord King,” Eolyn said. “I will not be subject to this cat-and-mouse game. If you do not trust me, if you do not believe me, then say so.”

“I trust your heart, Eolyn,” Akmael replied, “but your heart has led you to ill-advised decisions in the past. For this reason, I am not always inclined to trust your judgment.”

“For the love of the Gods! I am not the confused and frightened girl I was when my brother took up arms against you.”

“No, but you must understand the dilemma you have put me in.”

“The dilemma I have put you in?”

“If you knew of Ghemena’s plan and did not inform me, you were party to treason. If you did not know, then your authority over the magas is uncertain. Either way, the magas must remain bound and imprisoned until this conflict is resolved.”

Eolyn blinked and stepped away. “The magas have lived in peace in Moisehén for more than a decade. You cannot let the action of one woman—”

“Three women. The blatantly treasonous act of three women, all devoted students of yours. They have brought war upon us, Eolyn. Who knows how many others among your followers support them?”

“The magas who remain in my service have done nothing to merit suspicion.”

“All magas merit suspicion.” Akmael hesitated at her stricken look. He let go a slow breath and softened his tone. “There is a history here that we have not yet overcome, Eolyn. You, of all people, must understand that. Too many of our subjects still remember the war against my father.”

“And the purges that followed?” she shot back.

“The violence that tore this kingdom apart,” he conceded. “Right or wrong, the magas were left with the blame. We must manage this situation carefully, to protect you and your daughters. To see that justice is done.” 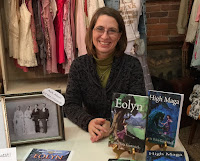 Karin Rita Gastreich writes stories of ordinary women and the extraordinary paths they choose. She lives in Kansas City, Missouri, where she is part of the biology faculty at Avila University. An ecologist by vocation, Karin has wandered forests and wildlands all her life. Her pastimes include camping, hiking, music, and flamenco dance. In addition to THE SILVER WEB trilogy, Karin has published short stories in World Jumping, Zahir, Adventures for the Average Woman, and 69 Flavors of Paranoia. She is a recipient of the Spring 2011 Andrews Forest Writer’s Residency.

The first book of the series, EOLYN, will be a FREE download on Kindle only on May 1.

Purchase link for EOLYN, Book One of THE SILVER WEB: http://www.amazon.com/Eolyn-Silver-Web-Book-1-ebook/dp/B01B8F4G50/

Purchase link for SWORD OF SHADOWS, Book Two of THE SILVER WEB: https://www.amazon.com/Sword-Shadows-Silver-Web-Book-ebook/dp/B01G5L1GEG/

Purchase link for DAUGHTER OF AITHNE, Book Three of THE SILVER WEB: https://www.amazon.com/Daughter-Aithne-Silver-Web-Book-ebook/dp/B06WCZYRNW/

Karin will be awarding a $10 Amazon or B/N GC to a randomly drawn winner via rafflecopter during the tour.
a Rafflecopter giveaway
Posted by JC Jones at 1:30 AM

Great to have you here. I love the cover.

Thank you! Cover art & design is by Thomas Vandenberg.