The United States media is abuzz with news of the mysterious disappearance of Hollywood movie star, Goldie St. Helen.

Ex-Delta Force Blake Deco receives a tip from a Mexican friend that a drug lord, obsessed with the beautiful actress, is holding her captive in Tijuana.

With the help of a reluctant army friend, Blake mounts a daring rescue.

What he doesn’t expect is to have feelings for Goldie—or that a killer is hunting them.

Clad in tactical black, Blake rested on his chest in the dark chaparral. He watched his curly-haired friend beside him maneuver the tiny dragonfly drone with his phone. The luminous screen showed its flight path toward Dai Lo’s hacienda in the northeastern outskirts of Tijuana, nothing around it for miles.

The drone sent back images of the 375,000 square feet compound, including some of Dai Lo's men patrolling. It hovered in front of the three-floor mansion built with stacked balconies and double-hung windows. It then swooped down to a porch with three tall columns under a pediment. Finding no entry point, Jack raised it up again.

“Do that,” Blake responded.

“Not unless I have to. I’m not an assassin,” Blake said.

“So why did you give Chavez the impression you will?”

“If Chavez knew what I was thinking, he wouldn’t give me the weapons. Then how are we going to save the actress?”

“If you still want to go on that European tour, start thinking positive.”

The tiny drone went around the mansion and flew past a lit pool, buffeting over a garden and an annex connected by a sheltered catwalk. It moved sideways until it came to a lit corner window on the third level. The visual zoomed closer to the windowsill and sent back an image that left both men recoiling with gasps.

Read Here for Five Place  Khaled Talib might visit for inspiration for his books.

London
It’s been a while since I visited London, and I dare say it’s one of those places that offers the perfect setting for a thriller.  In my thriller, Incognito,  the protagonist Ayden Tanner is a Briton.  So, I could explore a sequel. I have, in fact, been asked to write a sequel, and if I had a choice, it would be London. The dark clouds and the rain have room for sinister activities.
Provence, France
Having watched Ridley Scott’s movie A Good Year, I was fascinated with Provence in France.  The movie is based on Peter Mayle’s novel of the same name. The author has also written several crime novels, so I’d like to see what I can pluck over there apart from grapes. If I could visit a French castle or two to include in my next  thriller, that would be great.
Chinatown, San Francisco
Big Trouble in Little Chinais one of those movies that I never get bored watching it again and again. It would be interesting to recce Chinatown to see what I can come up with. Obviously, Lo Pan and friends are not going to be there, but one could always be inspired to write an action fantasy novel of a different kind. In fact, I’ve been seriously thinking about it as I plan to write a sequel for my latest thriller, Gun Kiss. I sure want the protagonist, Blake Deco and his new bride and famous movie star, Goldie St. Helen to come back.
The River Nile, Egypt
I used to live in Cairo, Egypt where I worked as a magazine writer. The Nile is a mysterious place, and it’s not surprising why many authors and movie makers have featured it in their stories. Spending three days on a felucca or a boat would not only be an exotic experience but a thrilling one. The trip could inspire a thriller, a murder-mystery or even a love story. Who knows? If I’m lucky, I might get myself embroiled in an adventure with grave diggers!

The Orient Express
I’ve said it often and I’ll say it again —there’s room for another murder on The Orient Express. In my second thriller novel, Incognito, I had a few scenes taking place on a train between Switzerland and Italy. I enjoyed writing those scenes. If I could, I’d like to go on the longest trip they have that begins from Istanbul or ends there. So cozy. Chug, chug, chug.
~~~~~~~~~~~~~ 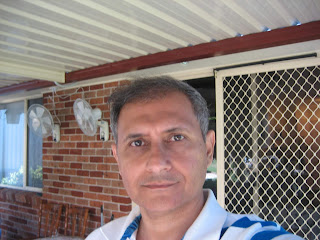 Khaled Talib will be awarding a Amazon Fire 7 8GB tablet to a randomly drawn winner via rafflecopter during the tour. The prize is limited to U.S. and Canada only.

Thanks for hosting me.

I know I will love reading this book. I have been a fan of Khaled Talib since Incognito. (jozywails@gmail.com)

Hi Bocephallus, thank you for your kind words. I am excited to know you enjoyed Incognito. I hope Gun Kiss meets your expectations as well. It's not a dark thriller like Incognito, rather, more breezy. :-)