The Three Poisons by John Malik - Book Blast and Giveaway

This post is part of a virtual book tour organized by Goddess Fish Promotions. The author will be giving away a $10 Amazon/BN GC to a randomly drawn host. 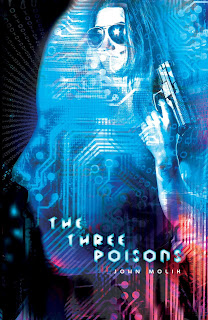 It's 2025. An evil cabal known as the Horsemen are looking to colonize space with advanced technologies that have been kept hidden from humanity. A dark faction wants to destroy life as we know it. An artificially intelligent computer must learn love to save mankind, but is there enough time?

Just then, the lights dimmed and a beautiful young woman wearing a dazzling alabaster white Kabuki mask complete with sumptuous plum-colored lips entered the room from behind Ben’s podium. On the mask were black eye holes with curving lines ascending from the corners which stylistically became the eyebrows—a solitary blue tear was painted just below the right eye. She was dressed in a stunning flesh-colored skin-tight silk flowing robe which clung to every sensuous curve of her body. She sashayed up toward the men at the table while the somber second movement of Beethoven's seventh symphony played from speakers in the back of the room. The lights in the room had dimmed further and an intense white hot spotlight lit the young woman from the front. She carried a reddish vile in the cupped palms of her hands. The vile was placed on the table in front of everyone. Slowly, a laser shone down from the ceiling and bathed the capsule in a bright white light.

Ben spoke. “Herein lies the blood of your brother, who has been rightly sacrificed.” He paused as the light shone onto the vial. “Light and darkness are deemed the world’s eternal ways. He who walketh in the former does not return; that is to say, he goes to eternal bliss, whilst he who walks in the latter comes back again in the material form and is thus destined to pass through further transmigrations until his everlasting soul is purified by the light.”

About the Author: I grew up in Rancho Palos Verdes, California, and currently reside with my wife in Christchurch, New Zealand. We have two kids, Jared, 20, and Lauren, 18.

My passion for writing began when I was a student at UC Davis and worked as a feature writer for the California Aggie newspaper. Having been nominated for a Brasler Prize (National Scholastic Press Assoc., 1986) for a feature on genetic engineering, I later found the inspiration to write again. In 2013, I began outlining my first thriller, The Fiduciary Delusion, which became the first novel in the Horsemen trilogy. I love to read techno-thrillers, science fiction, and action and suspense novels. Some of my favorite authors include: Philip K. Dick, Kurt Vonnegut, Lawrence Sanders, Robin Cook, and Clive Cussler.

My interests include science, information technology, speculative fiction, existential philosophy, health, and both Western and Eastern holistic medicine. On many occasions, I have also been witnessed strumming guitars, tickling the ivory piano keys, and writing music. In addition, I can be regularly found at the gym lifting weights, or trudging up hills, sea kayaking, and getting out and about enjoying the beautiful, wild outdoors.

Hi JC, Thanks for hosting. I really loved writing this final in the series. I spent a good amount of time researching the material and was “emotionally invested” in the existential journey as experienced by the main characters. It reads very well as a standalone, so readers would have no trouble starting with this one. Kind Regards, John.