Waltz With Me by Debra Holt - Book Blast and Giveaway

This post is part of a virtual book tour organized by Goddess Fish Promotions. Debra Holt will be awarding a $10 Amazon/BN GC to a randomly drawn winner. Click on the tour banner to see the other stops on the tour. 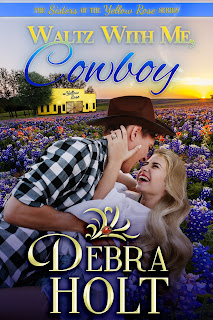 Calla Rose returned home to McKenna Springs to help save her family's business... The Yellow Rose... a ninety-year old Texas dance hall. She also came home to heal. Being a victim and finding her trust level in men damaged, she is determined to succeed in this one thing for her family and nothing is going to deter her from doing just that. Now even a green-eyed cowboy/mayor with heart-stopping smiles and kisses that threaten to thaw the ice around her heart.

Ty Conners wasn't looking for love. He had simply stopped in to welcome the latest business owner to town. But coming face to face with Calla Rose would prove an unforgettable experience in more ways than one and send his heart into a tailspin. Never a man to not face a challenge head-on, he prepared to get past the barricades she had erected between herself and the male population. But it was easier said than done, and just when he's within reach of her heart, a lie brings memories of pain and distrust and Calla's heart may be out of his reach for good.

“You’re right. It’s the best offer. And I’ll take you up on it.” She placed her hand in his in order to get a hand up from the step. Mistake. His hand was warm, and the warmth seemed to flow up her arm and fill her with a sense of peace that was most disconcerting. Once on her feet, she gave a slight tug and he released his grip. Was she sorry? Silly thought. Her mind was just tired from the long and trying day. The fresh air would do the trick to put things in their proper perspective... including the man beside her.

A few minutes later, Calla felt the tenseness leave the neck muscles and the corners of her mouth curved upward of their own accord. The windows were down, and the pickup was making its way along the country lane as it followed the curves of the river, crisscrossing bridges from one side to the other as it went deeper into the tall canyon. The breeze ruffled through her hair. Here she was, taking a ride in a pickup, listening to a lively George Strait swing tune on the radio, and a good-looking cowboy beside her. If those people from her old life could see her now… would they think she had lost her mind? Did she think she had?

Or would they think she had finally found it? That sudden realization brought a strange feeling with it. If she didn’t know better, she’d think she had finally found where she belonged. But that couldn’t be… could it? The city life and a stately courtroom had been her mecca. How did things switch course in mid-stream on her? Calla’s gaze went to the man beside her and just then, he turned and gave her a look and smile that answered her unspoken question. Silly! She jerked her gaze back to the open window. How could he know what she was thinking? When she wasn’t sure of it herself? 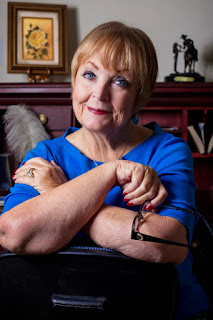 Born and raised in the Lone Star state of Texas, Debra grew up among horses, cowboys, wide open spaces, and real Texas Rangers. Pride in her state and ancestry knows no bounds and it is these heroes and heroines she loves to write about the most. She also draws upon a variety of life experiences including working with abused children, caring for baby animals at a major zoo, and planning high-end weddings (ah, romance!).

When she isn’t busy writing about tall Texans and feisty heroines, she can be found cheering on her Texas Tech Red Raiders, or heading off on another cruise adventure. She read her first romance...Janet Dailey's Fiesta San Antonio, over thirty years ago and became hooked on the genre. Writing contemporary romances, is both her passion and dream come true, and she hopes her books will bring smiles...and sighs...to all who believe in happily-ever-after’s.

Buy the book at https://www.amazon.com/gp/product/B07FRKGCGW/ref=x_gr_w_glide_ku_bb

Thank you for hosting my book on your site. I appreciate your time and efforts on behalf of authors and readers alike!