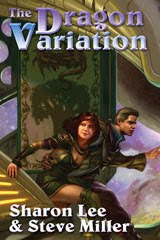 One of my early post recommended the Liaden Series as a must read. If you have never read any of the Liaden books here is a chance to win the eBook version of The Dragon Variation,an omnibus edition of three Liaden Universe novels. Read the copy of the Expanding Universe post below then follow the link to post your comment for a chance to win.


"In celebration of the publication of Mouse and Dragon, the thirteenth novel set in their Liaden Universe®, authors Sharon Lee and Steve Miller are holding an Expanding Universe Contest! Yes! No less than thirty-six electronic copies of The Dragon Variation will be given away.

That’s three complete novels under one cover. No prior knowledge of the Liaden Universe® required. Electronic! In Baen Books’ DRM-free, multiplatform style. This omnibus can be read on your Kindle, your phone, your iPad, your desktop, or other ereader.
Still need some convincing?

The first nine chapters of each of these novels may be read for free at the Baen website.
Conflict of Honors
Local Custom
Scout’s Progress"
Posted by JC Jones at 4:31 PM