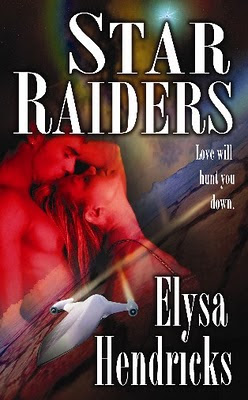 This month has been a good one for new Science Fiction Romance. Star Raider by Elysa Hendricks is another worthwhile addition to any fans library.

Ten years ago 18-year-old Shyanne Kedar fell in love with Greyson Dane. Shyanne escaped when she realized that Greyson had only used her to find and arrest her father. Now 10 years later Greyson reappears in Shyanne’s life. He says he is there to find the person who is destroying ships and outposts killing the inhabitants using Shyanne’s name. While there is still attraction between the two there is no trust. They have to find a way to work together to save not only Shyanne but also the people and planets of the Earth Alliance.

This is a well-written story and a good read. For me there were too many pages given over to sex scenes. I just skimmed those pages to make sure they contained nothing significant to the plot. I suspect there a other who do the same thing.

I purchased Star Raiders from Amazon.
Posted by JC Jones at 4:59 AM

Thank you so much for your kind words about STAR RAIDERS. I'm always pleased to hear when a reader enjoys my stories. Hmm, I'm a bit surprised that you felt there was too much sex. :-) Compared to STAR CRASH, the sex in STAR RAIDERS is mild. I do try to tailor the amount of love scenes to fit the story.

It isn't that you did not taylor the sex to the story. What brought on the comment was that most of the romances today have long sex scenes and for me they are getting redundant. I just skim and go the the next part of the action.

I read Star Crash when I came out and also enjoyed it. Thanks for taking the time to comment. It is always a thrill when I get a comment from an author.

I have to admit that sometimes I skim thru love scenes too. Seems the older I get the less I want to read them or write them. My current WIP isn't a romance, so there are no love scenes to worry about. :-)
Elysa Hendricks
www.elysahendricks.com