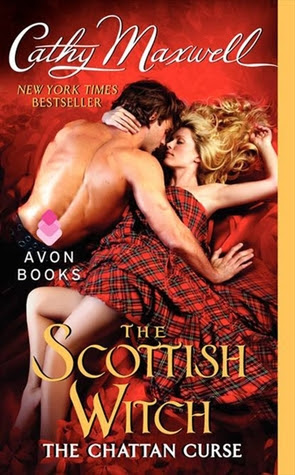 Every woman has her dreams.
Portia Maclean believes she is beyond love and marriage. Then one moonlit night, while attempting a daring masquerade in a desperate bid to protect her family, she finds herself swept off her feet by a powerful stranger. His very touch makes her long for much more. But what will he do when once he discovers she has betrayed him?

Every man has his demons:
Harry Chattan is fighting for his family-their honor and their lives. For two hundred years the Chattan men have been destroyed by love.and now he's come to Scotland on the hunt for a witch who can break the legend's curse. Instead he finds himself bewitched by the tantalizing Portia. Determined to right legendary wrongs, Harry has vowed to fight the demons that torture him.
But will that battle destroy her as well?
The Scottish Witch continues that story of the Chattan Curse..  Harry Chattan want to save his brother, Neal, who is doomed if the curse is not lifted.  And the Curse.  If any Chattan falls in love it will cause their death.  Harry does not have much time.   He has come to Scotland hoping to find a witch who can lift the curse.
Portia Maclean needs money to support her family.  Harry is offering money to any witch.  Portia has found a book of curses.  For the money Harry is offering she can use the book and be a witch.
That is the set up and the story moves from there.  You also have a lovesick sister, a meddling mother, a jealous woman and the plot thickens.  Of course Harry falls in love with Portia and the curse kicks in. This is a great series.  The characters are well drawn, the plot interesting and the tension just keeps increasing.
This is the middle book so the curse is not lifted.  It is up to the last Chattan, Margaret, to find the cure to the curse.  That happens in the yet to be released next book.  There is a teaser for book three in the back of the Scottish Witch.
Harper Collins published The Scottish Witch by Cathy Maxwell in 2012.
I received an ARC of The Scottish Witch from Edelweiss.
Posted by JC Jones at 1:00 AM