Legend of the Highland Dragon by Isabel Cooper 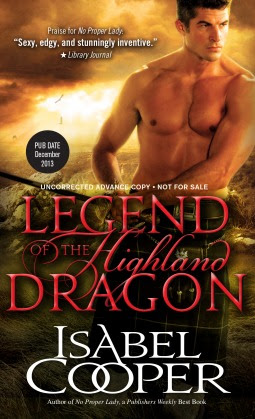 Descendants of an ancient alliance, they live for centuries, shifting between human and dragon forms. Some wander the earth; some keep to their lands in Scotland. And Stephen MacAlasdair, the newest lord of the family, must go to London to settle his father’s business affairs. He brings an object of great power and greater darkness. He finds an enemy from his past, whose wrath is still living and deadly. And he meets an ally he’d never have expected.

1894 London, doesn't provide an easy life for women of the lower class, but Mina Seymour has managed to work herself up to a position as the secretary of a famous scholar. When a tall, dark Scottish stranger demands to see her employer, Mina is irritated; when MacAlasdair's departure leaves the professor worried, she’s suspicious. Determined to figure out the situation, she investigates further - and finds a world and a man she could never have imagined."


I love dragons and Stephen MacAlasdair in Legend of the Highland Dragon does not disappoint.  He and Mina Seymour have to carry the story and they both do a great job.  Stephen is the oldest in his clan.  Mina is a modern woman in 1894.  She is smart, strong, and driven.  They are thrown together when an old enemy reappears.


Their chemistry is wonderful but both fight the attraction even as they work together.  Mina had taken typewriter training and worked up from her lower class birth.  She sees the class difference as the problem.  Stephen is a shape shifter and in his other form is a dragon.  He sees that as the problem.


The story brings the two together in a well thought out plot that requires they to get over their per-conceived notions.  This is an interesting story that moves in a consistent manner to a great conclusion.   The writing is good, the characters are interesting, and there is a great journey to the HEA.


Stephen has a brother who shows up in the book.  It looked like there were hooks for future stories about the MacAlasdair family.


Sourcebooks Casablanca published Legend of the Highland Dragon by Isabel Cooper in 2013.


I received an ARC of Legend of the Highland Dragon from Netgalley.
Posted by JC Jones at 12:30 AM