The Descartes Legacy by Nina Croft 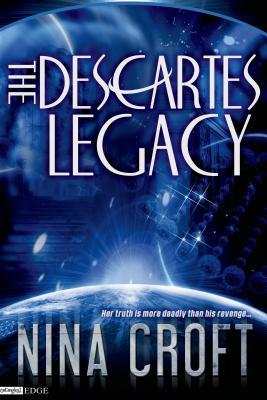 
"Lucas Grafton has spent the last ten years hunting the Conclave, a secret organization who took everything from him: his wife, his child, his very identity. Now he has a lead—an imminent terrorist attack on London—code-named Descartes.
Born with a genetic illness, Jenna Young has always known she was different. But the unexpected death of her father catapults her into a world of murder and terrorism she never expected. In order to stay alive, she must solve a twenty-five year old mystery—and her only ally a hard bitter man in search or retribution, her only clue the Descartes Highlands, an area on the near side of the moon.
Luke’s need for revenge collides with Jenna’s hunt for the past, and together they must stand against the Conclave. All the while uncovering the truth behind Jenna’s illness, a truth that will make Jenna question her very humanity."

At the end of The Descartes Legacy Nina Croft tells how this book came to be.  It seems that one morning at breakfast Bob, her other half, asked her why she didn’t write a good book?   She says; “He survived (just) and I discovered his idea of a “good book” was one with no romance, no vampires, werewolves, or aliens.  I managed some of that, although the romance crept in (hey, I like romance) and just a tiny, little alien.  I hope he likes it.”


I don’t know how Bob feels about the result but I really liked it.


Jenna Young is a great character. She is pro-active, stronger than she thinks and does not wait on others to save her.  She has been taught to keep others out of her life but changes when she needs to in order to survive. I loved her reaction to all that happened and how she took control in the end.


Luke Grafton is the ultimate loner, shutting everything personal out of his life.  He has a single-minded goal, find and destroy the Conclave.  When Jenna shows up on his radar as a way to get answers he tries to maintain his distance.  That is where the romance crept in.


The Descartes Legacy is a very well written and plotted story.  From start to finish the tension never lets up. Just when I though I knew what was going on a new surprise that changed everything was dropped into the action.  Everything from the world building to the character development kept the story moving.  Look for an exciting finish but it only solves part of the problem.  Now I have to wait for the sequel to see what happens next.


Entangled: Edge published The Descartes Legacy by Nina Croft in 2013.
Posted by JC Jones at 12:30 AM