Vixen in Velvet (The Dressmakers #3) by Loretta Chase 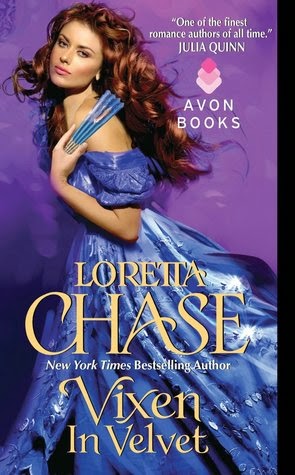 From the Diary of Leonie Noirot: The perfect corset should invite its undoing . . .

Lethally charming Simon Fairfax, Marquess of Lisburne, has reluctantly returned to London for one reason only: a family obligation. Still, he might make time for the seduction of a certain redheaded dressmaker—but Leonie Noirot hasn't time for him. She's obsessed with transforming his cousin, the dowdy Lady Gladys, into a swan.

Leonie's skills can coax curves—and profits—from thin air, but his criminally handsome lordship is too busy trying to seduce her to appreciate her genius. He badly needs to learn a lesson, and the wager she provokes ought to teach him, once and for all.

A great plan, in theory—but Lisburne's become a serious distraction, and Leonie's usual logic is in danger of slipping away as easily as a silk chemise. Could the Season's greatest transformation be her own?

I loved the first two books in The Dressmakers series and have been looking forward to book three. I loved Leonie.  She has always been the practical sister taking care of the business end of their shop.  Now her other two sisters are married not longer as big a part of the business as before.  Leonie is determined to keep the business going and does not plan to let anything get in her way.  Then Simon Fairfax shows up and she finds she is not as practical as she thought.  At the same time Simon presents himself as totally impractical but he is anything but.

The two embark on interesting journey.  I loved how they interacted and how each of their characters were revealed as the story progressed.  Once again Loretta Chase has written a fascinating story full of romance, laughter and love.  Vixen in Velvet is a great end the the Dressmaker series.

Avon published Vixen in Velvet by Loretta Chase in 2014.

I received an ARC of Vixen in Velvet from Edelweiss.