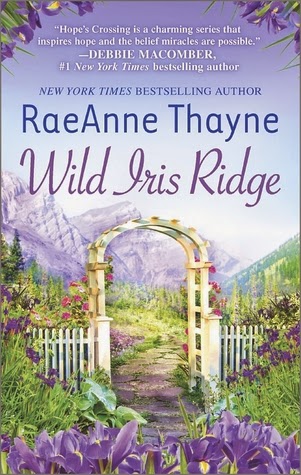 Lucy Drake and Brendan Caine have only one thing in common…

And it's likely to tear them apart. Because it was Brendan's late wife, Jessie—and Lucy's best friend—who'd brought them together in the first place. And since Jesse's passing, Brendan's been distracted by his two little ones…and the memory of an explosive kiss with Lucy years before his marriage. Still, he'll steer clear of her. She's always been trouble with a capital T.

Lucy couldn't wait to shed her small-town roots for the big city. But now that she's back in Hope's Crossing to take care of the Queen Anne home her late aunt has left her, she figures seeing Brendan Caine again is no big deal. After all, she'd managed to resist the handsome fire chief once before, but clearly the embers of their attraction are still smoldering.

Sadly we will be leaving Hope's Crossing after this book.  RaeAanne Thayne wrote 2 Hope's Crossing trilogies and a bonus book in the series.  In an interview she said “My June book, WILD IRIS RIDGE, is my last planned Hope’s Crossing book and I’m starting a new series, Haven Point, with my November title SNOW ANGEL COVE. The hero of SNOW ANGEL COVE is Aidan Caine, yet another sibling of Charlotte, Dylan and Brendan Caine,”

But before we leave Hope's Crossing we get Brendan’s story.  He has a history with Lucy Drake.  There was a really great kiss between the two years ago but then Brendan married Lucy’s cousin, Jessie. Jesse died two years ago and Brendan is slowly recovering.  Now Lucy is back in Hope’s Crossing and the sparks start to fly.  Brendan starts to come alive again while Lucy realizes she still has feeling for Brendan.

I enjoyed the story.  It had a nice vibe with plenty of tension between Lucy and Brendan.  Neither were willing to admit to their feeling and it looked like they would go their separate ways.  It took an accident to finally bring them together.   It was a nice way to end the series.

Harlequin published Wild Iris Ridge by RaeAnn Thayne in 2014.
Posted by JC Jones at 12:00 AM