What goes on behind closed doors doesn’t always stay there…

Calamity (Callie) Barnstable isn’t surprised to learn she’s the sole beneficiary of her late father’s estate, though she is shocked to discover she has inherited a house in the town of Marketville—a house she didn’t know existed. However, there are conditions attached to Callie’s inheritance: she must move to Marketville, live in the house, and solve her mother’s murder.

Callie’s not keen on dredging up a thirty-year-old mystery, but if she doesn’t do it, there’s a scheming psychic named Misty Rivers who is more than happy to expose the Barnstable family secrets. Determined to thwart Misty and fulfill her father’s wishes, Callie accepts the challenge. But is she ready to face the skeletons hidden in the attic?

I didn't realize that I had signed up to review Skeletons in the Attic until I got the link to the book. After reading the book I was glad that I did. This is book one in the series and it is off to a great start. The main character, Calamity (Callie) Barnstable, does not realize how good she is at solving puzzles until the death of her father sends her off to solve a 30 year old mystery. The mystery; find out what why her mother disappeared. There is a great cast of characters to help her along. Each one contributes a little to the solution to the puzzle. I was kept guessing the entire time and the ending was a surprise. While the main mystery was solved there were a lot of threads left hanging. I was a little upset about that until I remembered that this is book one in a new mystery series. Now I am looking forward to the next book to see how they are handled in the next book.
~~~~~~~~~~~~~
EXCERPT:

Leith Hampton placed the will in front of him, smoothing an invisible crease with a well-manicured hand, the nails showing evidence of a vigorous buffing. I wondered what kind of man went in for a mani-pedi—I was surmising on the pedi—and decided it was the kind of man who billed his services out for five hundred dollars an hour.

He cleared his throat and stared at me with those intense blue eyes. “Are you sure you’re ready, Calamity? I know how close you were to your father.”

I flinched at the Calamity. Folks called me Callie or they didn’t call me at all. Only my dad had been allowed to call me Calamity, and even then only when he was seriously annoyed with me, and never in public. It was a deal we’d made back in elementary school. Kids can be cruel enough without the added incentive of a name like Calamity.

I knew at some point I’d have to face the fact that my dad wasn’t coming back, that we’d never again argue over politics or share a laugh while watching an episode of The Big Bang Theory. Knew that one day I’d sit down and have a good long cry, but right now wasn’t the time, and this certainly wasn’t the place. I’d long ago learned to store my feelings into carefully constructed compartments. I leveled Leith with a dry-eyed stare and nodded. 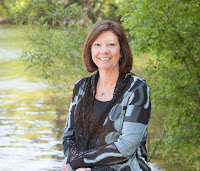 Judy is a member of Sisters in Crime, Crime Writers of Canada, International Thriller Writers and the Short Mystery Fiction Society.

SKELETONS IN THE ATTIC is on sale on Amazon Kindle from December 1 through December 15 for .99 (reg. price $4.99). http://getbook.at/SkeletonsintheAttic

Judy Penz Sheluk will be awarding a $10 Amazon/BN GC to a randomly drawn winner via rafflecopter during the tour,

Thank you for hosting. Good news! The 99¢ sale on this book now lasts through December 15th ... grab a copy today!

Thanks for hosting me and for the great review! I know some people wanted the ending to have everything tied up in a bow, but life doesn't work like that, does it? So, I left a hint of mysteries to come...working hard on the sequel.

Great to have you and looking forward to the next book in the series.