Today I have author Sara R. Turnquiest visiting.  She is the author of A convenient Risk a Historical Romance set in the American West.  Check out the blurb and excerpt then see what a few of Sara's favorite things are and what she has planned for her next book.

He never imagined her heart would be so hard to reach.

Forced into a marriage of convenience after her husband dies, Amanda Haynes is determined she will never love again. Not that it bothers Brandon Miller. He needs her husband’s cattle. She needs financial stability and long-term support for her son and herself. But she never expected to care so much about the running of the ranch. Or the rancher.

Butting heads over the decisions of the ranch, adding to her frustration and grief at her loss. Her wellbeing is soon threatened as their lives become entangled with Billy the Kid and his gang. What has she gotten herself into? What kind of man has she married? Is there any way out?

A strong arm grasped Amanda, catching her upper arm and dragging her onto the horse. As soon as she was solidly on the animal, she grabbed ahold of Brandon as tightly as she could.

They took off. The bull pawed at the ground, making all manner of grunting noises, but as if by some miracle, he ran off to the left. All of this happened as if time had slowed.

The horse continued to push forward. And as they neared the edge of the fence, Brandon urged the horse to go even faster. Were they going to break through? What would happen to the cattle with the fence destroyed?

But as they approached the fence, the horse leapt. Amanda gripped Brandon impossibly tighter. Jolted when the horse landed, her teeth chattered.

Only then did Brandon slow the horse. He then placed a hand on her upper arm and pushed.

He sucked in a deep breath and expelled it.

Had she been holding him too tightly? Her face warmed.

He took hold of her shoulders. “Are you all right?”

She nodded, and though their faces were but a breath apart, she was not quite able to meet his eyes, fighting tears in her own. Only then she found herself staring at his bare chest. Jerking her head away, she averted her gaze.

“Do you realize what could have happened?” His voice rose.

She nodded, still not able to meet his eyes. The force of his emotion hit her. Was he so concerned after her?

“I would have had to shoot that bull.”

What? Eyes wide, she tilted her face up to look at him.

“That bull is worth half my herd.”

So he was only worried about the cattle. Not her. His precious cattle.

What are your favorite TV shows?

I really only keep up with a few: “Big Bang Theory” for the comedy, “Face Off” for the competition, and “When Calls the Heart” because I love Historical Fiction/Romance
What is your favorite meal?

Hands down, I’m a fettuccine alfredo girl. I have to try everyone’s. I have my favorites…mostly small Italian eateries (aren’t they usually the best?).

If you were to write a series of novels, what would it be about?

Funny you should ask. I am in the editing process with the sequel to my debut novel, “The Lady Bornekova”. This series is about the Hussite Wars in the Czech Republic (their religious civil wars in the late 1400s to early 1500s).

Is there a writer you idolize? If so who?

There are a few Historical Fiction/Romance authors I adore: Michelle Moran, Melanie Dickerson, and Tamera Leigh. They each have such strengths in their writing that I would love to emulate.
How did you come up for the title of this book?

The working title of this book was actually “Second Chances”. But I decided that it was a bit too generic/general a title. There were several other books with that title. I wanted something more unique. The inciting incident in the book forms around a marriage of convenience. Yet, the marriage is a risk that each is taking. I played with those concepts and words until I arrived at “A Convenient Risk”. And it stuck.
~~~~~~~~~~~~~ 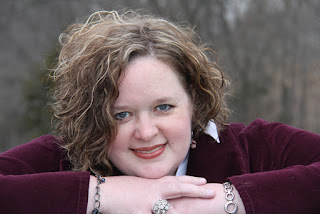 Sara is originally from Middle Tennessee. After a short stint in Memphis, where she earned a degree in Biology and began a career as both a Zoo Educator and a Sleep Technician, she then followed a dream to work for a large zoo in Orlando, FL as an Educator. Once she and her husband started their family, they moved back to Middle Tennessee where they currently reside. Sara and her husband now enjoy a full life with their three beautiful and very active children. She enjoys many creative outlets – singing, piano, drawing, drama, and organizing anything. And even though she has enjoyed her career as a Zoo Educator, Sara's great love of the written word continued to draw her to write. She has always been an avid reader and, for many years, has been what she terms a “closet writer”. Her travels and love of history have served to inspire her to write clean Historical Romance. Sara has made several trips to the Czech Republic. Her time among the Czech people and the landscapes of the country inspired her and greatly influenced her work on her debut novel, The Lady Bornekova, set in Hradec Kralove, Czech Republic. Sara is also the author of The General’s Wife, Off to War, Hope in Cripple Creek, and A Convenient Risk and a member of ACFW.

Thanks for this awesome giveaway.

I really enjoyed reading your interview, thank you!

Best of luck on your entry, angeline!

Thanks for hosting me today!

I enjoyed putting your post together. Thanks for being here.

Thanks for sharing the excerpt!

This sounds so good, and it sure appeals to the 'pioneer woman' in me.

What was your favorite book as a child? Thanks for the giveaway. I hope that I win. Bernie W BWallace1980(at)hotmail(d0t)com

Thank you, Victoria, for following the tour!

Thanks, Trix. It's one of my favorite scene (in its entirety)

I'm glad to hear it! This book was so much fun to research and write.

I was really more into mystery and science fiction when I was younger. As a middle school reader, I was into Star Trek: The Next Generation books, especially by author Peter David. And Nancy Drew books (all are written under a the same pen name). As a younger child, I would have to say my favorite book was "There Was An Old Lady Who Swallowed A Fly"...that book made me laugh and I loved the rhythm and cadence of it.