Daulphina’s father, the king of Asteria, has always wanted a male heir. Unfortunately for him, Daulphina’s magic means that will never happen unless her bastard half-brother displaces her on the throne. But she’ll take on all the gods herself before she lets that happen. He isn’t nice enough to be a good king.

But apparently, the gods don’t like being challenged because she’s flung across the void and into the dumpy old trailer and chiselled body of Joshua Killenyen, a rodeo bull rider from Alabama. With nothing to eat but Frosted Flakes and no knowledge how she got there, she better find a way home before she gets her head stomped in by the bulls she must ride. Or her brother will take the throne and reduce her people to slavery. Remember, he isn’t nice.

I stared at the warm water falling over me. It had to be magic. Somebody magicked me into a man’s body. Dear gods, did that mean this hairy man was in my body? Was body-switching possible? Granny had never mentioned any such thing when she taught me everything she knew about magic, not that I’d ever been anything but a disappointment to her. I never had the raw power she expected of her successor. Or was my body empty? Or dead?

I was still staring at the falling water when Jocelyn yanked the stall door open. “Joshua, I told you you had ten minutes. Damn it, what’s wrong with you? You still have your boxer shorts on. Have you even washed yourself?” She turned the knob, and the water went away.

I stared up at her. “Miss, you have to believe me. I’m not Joshua.”

She put her hands on her hips. “Who are you, then? The queen of England?”

“No, I’m not a queen. I’m the crown princess of Asteria. I’ve never heard of England.”

She put her hand to her forehead. “Joshua, just how drunk are you?”

“I’m not drunk. This isn’t my body. Somebody magicked me into it.”

Jocelyn stared at me for a second. “I don’t know what you’re playing at, but it isn’t going to get you out of going to Meemaw’s.”

I rose abruptly. “I’m not going anywhere until someone explains what’s going on! Just how did I become a man?” 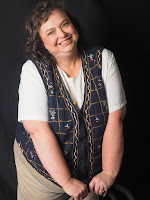 Jamie began writing stories about the man from Mars when she was six, and she never remembers wanting to be anything other than a writer. Everyone told her she needed a back up plan, so she pursued a Ph.D. in American literature, which she received in 1998. She started teaching writing and literature at Auburn University. One day in the midst of writing a piece of literary criticism, she realized she’d put her true passion on the backburner and neglected her muse. The literary article went into the trash, and she began the book that was to become her first novel. She writes about the fantastic . . . and the tortured soul. Her poor characters have hard lives. She still teaches writing and literature at Auburn University. She is the mother of a grown son.
Links:

Thanks for hosting me. I'd love to answer any questions your readers have and will be stopping by throughout the day. What the most unusual setting for an urban fantasy you've read before?

Good to have you here today. Interesting trope - female witch to male

It was fun, especially since the man also happened to be a rodeo bull rider.