In Enemy Hands by KS Augustin 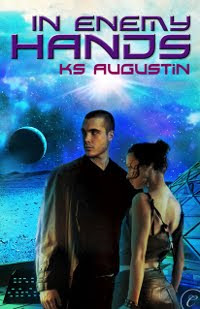 In Enemy Hands by KS Augustin is a launch title from Carina Press, a new digital arm of Harlequin. The book is only available as an eBook.

Three years ago Republic Security discovered that Moon Thadin’s lab partner was an underground anti-Republic activist and terrorist. Moon fell under suspicion, was detained for two years, and was not allowed to work when released.

After three years things have changed. The Republic needs her project to succeed. She now has a new lab partner and a new work location. Srin Flerovs is a human calculating machine that can handle calculations even the most advanced computer cannot. He is essential to the success of Moon’s work. To keep Srin under control his memory is erased every 2 day so every two days Moon must bring Srin back up to speed and every two days the attraction Srin feels for Moon reappears. It soon becomes apparent that both are captives of the Republic and both need to escape but what can one woman and a man whose memory is erased every two day do.

I didn’t know what to expect from In Enemy Hands. When I looked up KS Augustin I found that she wrote mostly erotica but In Enemy Hands was being marketed as Science Fiction Romance with no mention of erotica. What I found was a story with a unique plot twist, good characters and plenty of action. In Enemy Hands is very good Science Fiction Romance and while there is an attraction between Moon and Srin it is a natural part of the plot. On the down side, when I finished Chapter 23 and it said The End the story was far from over. Many of Moon and Srin’s problem were left unsolved so I hope there will be a sequel soon.

Carina Press published In Enemy Hands by KS Augustin in 2010.

I purchased In Enemy Hands from Carina Press and side loaded it to my Nook.
Posted by JC Jones at 5:48 AM

Only just discovered this review, JC. Finding readers that intersect both SF and romance is a bit of a tough ask, so thanks very much for your review. It's very much appreciated.

Thanks for commenting. Is there going to be a sequel? I really hope there will be more of Moon and Srin.