A Tryst with Trouble by Alyssa Everett

I published this review the first time on April 6, 2012.  I knew the book was purchased by  Dorchester Publishing and was in limbo when they closed their doors.  I loved it and went ahead and wrote a review hoping it would get picked up by someone else.  Well, it did.  Carina Press has published several other books by Alyssa and when the rights cleared they picked up A Tryst with Trouble.  When I saw it on the schedule I emailed Alyssa and told her I would re-post my original review near the release day.  I debated whether to cut the first paragraph of the review and decided to leave it in as it is part of the history of the book. Here it is my review of A Tryst with Trouble.  This is a really good book so I hope you will pick it up. 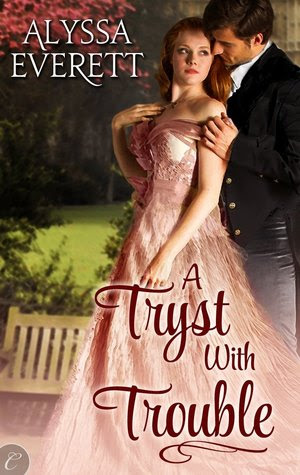 I debated publishing this recommendation. Dorchester Publishing had A Tryst with Trouble scheduled to be released on April 1, 2012.  In March of 2012 Dorchester closed it doors and no one seems to know what will happen to the books where they had rights.  So I don’t know when this book will be available but because I really liked ( I don't give many 5 stars but I gave 5 on Goodreads) it I decided to mention it and hope it becomes available soon.

Here is the Goodreads Summary:

"Dogged for years by painful gossip about his father’s homosexuality, the Marquess of Beningbrough—Ben, to his friends—has protected himself by becoming the ultimate man’s man. Passed over by suitor after suitor in favor of her pretty but vapid younger sister, clever, forthright Lady Barbara Jeffords has reached the disappointing conclusion most men are shallow, boorish clods. When a philandering footman turns up dead, the two square off: he’s sure she’s determined to pin the crime on his hapless young cousin, while she thinks he means to shift the blame to her sister. To find the real killer, Ben and Barbara must declare a truce that threatens to expose both their buried insecurities and their growing desire for each other."

I loved the characters, the dialog, the tension, and the romance.  Alyssa Everett used a difficult situation to great advantage in the book, one that you seldom see in main stream historical fiction.  I loved how she handled the Duk'es preferences for men and when finally asked by his son “why” she had an elegant explanation.  That preference was a driving force in his son’s development and affected much of his action.  You would think that would weigh down the book but it was handled with good taste and a lot of humor.

I think Alyssa Everett has a great future as a historical romance writer.  Fortunately, Alyssa does have another book coming out so we will not have to wait for Dorchester to get sorted out to read her next book which will probably be her first published book. Ruined by Rumor was released by  Carina Press on May 25, 2012. I got a copy from NetGalley. You can see what I said about Ruined by Rumor in my What Else I Read in April post.

I do plan to keep an eye out for future books by Alyssa Everett and hope this book will be published soon.
Posted by JC Jones at 12:30 AM