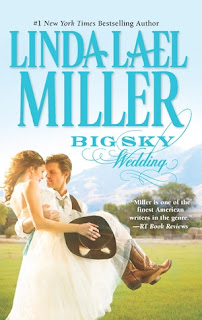 "The "First Lady of the West," #1 New York Times bestselling author Linda Lael Miller, cordially invites you to Parable, Montana-where love awaits. Wedding bells are ringing in Parable, Montana, but Brylee Parrish hasn't enjoyed the sound since being jilted at the altar by Hutch Carmody. She's over Hutch now, and running a multimillion-dollar business is challenging enough for this country gal. So she should avoid falling head-over-boot-heels for A-list actor Zane Sutton. He's come home to his rodeo roots, but Hollywood lured him away once and just might again. Yet everything about him, from his easy charm to his concern for his young half brother, seems too genuine to resist....

Zane didn't come to Parable for love-but count on a spirited woman to change a jaded cowboy's mind. Problem is, Brylee's not convinced he's here to stay. Good thing he's determined to prove to her, kiss by kiss, that she's meant to be his bride."

Big Sky Wedding is book five in the Parable, Montana series.  I won the first three books in the series and book five when I entered Linda Lael Miller’s August contest on Writerspace .   It just happened that I had checked out the audio book of Big Sky Summer book four and was listening to it on my way to Texas and World Con.  I have not read the first three yet but wanted to hear Brylee’s story since I had met her and liked her in Big Sky Summer.

It seems that Brylee was ready to let go of the past and just the right person showed up to help her.  I loved the characters.  Zane is just great as the new man in Brylee’s life.  He is down to earth in spite of his fame.  He deals with Nash, his young half brother and Brylee with just the right touch.  Cleo, Zane’s housekeeper, is one of those unforgettable characters.  She provides some of the best humorous dialog in the book.

Most of the tension in the book comes from Brylee’s fear about committing and getting hurt again.  She and Zane moved very fast and I loved the way Zane slowed everything down so that their relationship had a chance to grow and mature.

While some of the main characters from the first 3 books do appear they only have walk on parts.  It looks like the series is moving on to focus on new people.  I saw some hooks for the next book, Big Sky Secrets.  I will just have to wait and see if I am right about who the two main characters will be.

Big Sky Wedding is a good addition to the Parable Series.  Pick it up for an enjoyable read.

Harlequin published Big Sky Wedding by Linda Lael Miller in 2013.
Posted by JC Jones at 12:30 AM