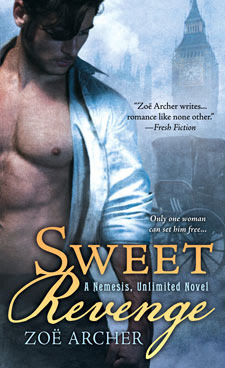 Historical Romance
What Goodreads says:
"The first in a breathtaking new series about the dangerous business of undercover revenge—and the undeniable pleasure of passion…
In the Business of Vengeance
When Jack Dalton escapes from Dunmoor Prison, he has only one thing in mind—finding the nobleman who murdered his sister and making him pay. But when he reaches the inn where the Lord Rockley is rumored to be staying, three well-dressed strangers are there to meet him instead. And the pretty blonde is aiming a pistol right at his head…
Desire Is Always Dangerous
Joining Nemesis, Unlimited has made Eva Warrick much more than the well-mannered lady she appears to be—one who can shoot, fight, and outsmart any man in the quest to right the injustices so often suffered by the innocent. She’s not afraid of the burly escaped convict, but she is startled by their shared attraction. She and her partners need Jack’s help to get to Rockley, but Eva finds she wants Jack for scandalous reasons all her own."
Characters:  This is the first book in a new series so the main characters have to be introduced.  Eva Warrick is a strong woman who believes in helping those who have no place else to turn.  She is part of Nemesis Unlimited and is the focus of this book.  Jack Dalton is the other focus.  He is a very strong personality who starts out thinking of himself as good for nothing but a dumb bodyguard.  With the help of Eva and others his character develops and he starts to see that he is a man with great intelligence and strength.  He and Eva both change and become a great team.  Other members of the team have an important part in the book and while they their characters development is not complete it is enough to help carry the story.
Plot:  This is interesting and different.  It starts with Jack Dalton in prison and being told his arch enemy is in the neighborhood.  This starts a chain of events that include a jailbreak, introduction to Nemesis Unlimited and the job they have signed up to do.  An important part of the plot is the fact that Nemesis helps those who have no other place to go for justice.  While action is a big part of the plot so is the character growth that brings Eva and Jack together.  This is after all a romance and needs a HEA.
Writing:  I have had mixed feeling about books written by Zoe Archer.  She writes in the passive mode in some books and the active in others.  I always like a story told written in the active.  Sweet Revenge hits the mark in active writing.  There is dialog, action, more dialog and more action that kept my attention and kept the story moving at a fast pace.  I never questioned Archer’s writing skill just the mode she writes in.  This is a very well written book.
World Building:  Much of this is based on the class history of the times.  Using that history Archer has created an undercover group that helps those who have no voice that allows them to get justice when treated unfairly by the upper class.
I found Sweet Revenge to be a great start to a new series and I will be looking for the next book Dangerous Seduction coming in December 2013.
St. Martin’s Paperbacks published Sweet Revenge by Zoe Archer in 2013
Posted by JC Jones at 12:30 AM