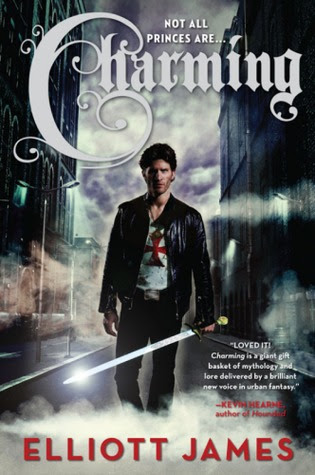 "John Charming isn't your average Prince...
He comes from a line of Charmings — an illustrious family of dragon slayers, witch-finders and killers dating back to before the fall of Rome. Trained by a modern day version of the Knights Templar, monster hunters who have updated their methods from chainmail and crossbows to kevlar and shotguns, he was one of the best. That is — until he became the abomination the Knights were sworn to hunt.
That was a lifetime ago. Now, he tends bar under an assumed name in rural Virginia and leads a peaceful, quiet life. One that shouldn't change just because a vampire and a blonde walked into his bar... Right?"

Let me start by saying that I loved Charming.  From there let me break down why I loved it.

Worldbuilding:  Charming had some of the most intense worldbuilding I have seen in any book.  Almost every scene and every character had to be explained and it had to be done in a book written in the first person.  This is a set up something I really hate – a lot of time in a characters head with no action just long winded explanations.  That did not happen here.  John Charming the main character did have to do all of the explanations for the world but it was so skillfully done that the story never faltered.  Something needed to be explained and the explanation appeared in the context of the story.  In an interview at the end of the story James stated that he cut put pages and pages about the world and he hated to do it.  He left in just the right amount to keep the story moving and for me to understand the world and the characters.  Very, Very well done.

Characters:  We start with John Charming, one of those Charming who have helped save the world numerous times.  He has problems and they help drive the story.  Sig is the main female characters and is a species that we think are imaginary.  Along with the intense worldbuilding there is some really intense character building in the story.  Much of it is necessary to explain the history of both the two main characters and several of the side characters.  Again everything arrived when needed and did not slow the story down.

Plot:  It is a standard plot.  Evil in the person of the vampires, good from the two main characters and some of the side characters.  A few surprises from some of the characters who are not as good or as evil as expected.  The characters and the worldbuilding take this from just the same old plot to something special.  Some things were settled but this is book one so look for loose ends that will be the focus in book two.

Writing:  This is the first published novel by Elliott James.  He has published numerous short stories in the past.  He is very good.   It takes very good writing skills to have the level of worldbuilding and character development you find in Charming.  The story moved smoothly and the tension built as the story progressed.

I highly recommend Charming.  It was fun, full of tension and had a high quirky content.  All in all a book I had trouble putting down.

I received an ARC of Charming from Netgalley.
Posted by JC Jones at 1:00 AM