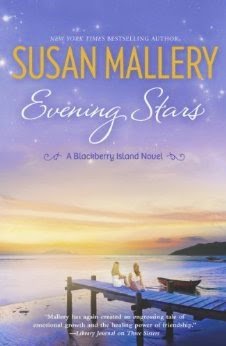 "New York Times bestselling author Susan Mallery returns to Blackberry Island with the poignant tale of two sisters on the verge of claiming their dreams.

Small-town nurse Nina Wentworth has made a career out of being a caretaker. More "Mom" than their mother ever was, she sacrificed medical school—and her first love—so her sister could break free. Which is why she isn't exactly thrilled to see Averil back on Blackberry Island, especially when Nina's life has suddenly become…complicated.

Nina unexpectedly finds herself juggling two men—her high school sweetheart and a younger maverick pilot who also wants to claim her heart. But as fun as all this romance is, Nina has real life to deal with. Averil doesn't seem to want the great guy she's married to, and doesn't seem to be making headway writing her first book; their mom is living life just as recklessly as she always has; and Nina's starting to realize that the control she once had is slipping out of her fingers. Her hopes of getting off the island seem to be stretching further away…until her mother makes a discovery that could change everything forever.

But before Nina and Averil can reach for the stars, they have to decide what they want. Will Averil stay? Will Nina leave? And what about the men who claim to love them? Does love heal, or will finding their happy ending mean giving up all they've ever wanted?"

If you like Susan Mallory’s books you will like Evening Stars.  This is the third book set on Blackberry Island.  I haven’t read the first two so I know it reads fine as a stand-alone.

Nina Wentworth is the main character.  She is the caretaker of the family and the story revolves around her.  I think many of us could see how she is creating problems where there should be none.. How she comes to terms with this is one of the themes of the story.  The two men in her life, one she just met and an old love who returns, is the other.

There are interesting side characters as well.  Nina’s sister Averil is facing some issues of her own and comes back to the Island to resolve them.  Nina and Averil’s Mom is a whole book on her own.  She just refuses to grow up.

Evening Stars is a quick easy read.  If you like romance with interesting characters and conflict you will like Evening Stars.

I received an ARC of Evening Stars from Netgalley.