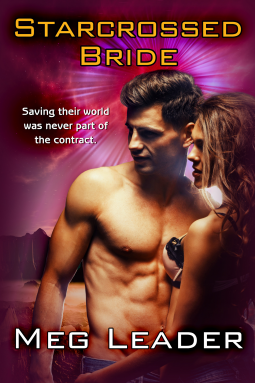 "A delightful and complex mix of comedy and fantasy-a sensual love story set in a sensational world. I hope for more from this talented author."-USA Today bestselling author Christie Ridgway.

Connall Storm is a man with aspirations. A two-name bastard on the colony of Last Hope, he enters a pragmatic marriage hoping to discover a treasure that will give him the power and wealth he wants. But in order to find it, he and his new wife must embark on a perilous expedition into the Western Mountains-and come back alive. Little does he guess that guarding his heart against his e
xasperating and far-too-sexy wife will be the real challenge. . .

Arkana Crystal Song has blue blood, the finest education, and an unexpected, massively irritating new husband. All she wanted to do was find out what happened to her parents, who disappeared years ago. Now she's stuck trekking through the wilderness with a man who drives her absolutely crazy. And she's starting to like the feeling a bit too much . . .

It isn't long before Connall and Arkana's fiery arguments flare into scorching passion. But when they come across a deadly alien menace on their travels, their love will face the ultimate test. Are they strong enough to save themselves-and their entire world?

Starcrossed Bride was a fun book to read even though he theme is serious.  The people on the planet are here because their star ship crashed.  They have no way to leave and have not realized that the planet is dangerous to them.  Enter Arkana Crystal Song and Connall Strom and their marriage of connivance.  That is where the fun begins.

I loved Arkana.  She keeps doing things for the right reason but the results are never what she expects.  Reading her exploits always brought a chuckle.  Connall is a mixed bag.  He so wants to be powerful to make up for his background.  He and Arkana come to an understanding when they marry.  He will get the power he wants – she will be able to continue her parent’s work and they will go their separate ways.  That does not work out that well.  There is the problem with the attraction they feel to each other.  Together they make a great pair but it does take awhile for both to accept it.

The plot is interesting and there was enough world building to support the story.  Several of the side characters are really fun. Jotan the Glorious adds humor to the story, as do Lucina and Risto.  Starcrossed Bride is a well-written book that I recommend for a fun read.

I received an ARC of Starcrossed Bride from Netgalley.
Posted by JC Jones at 12:00 AM

OoOh I hadn't heard of this one before, but now I'm really curious about it. Thanks for introducing me to it :)
-Kimberly @ Turning the Pages