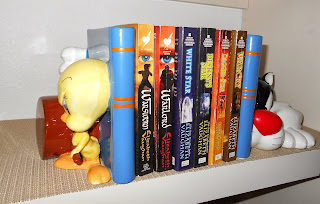 Teaser Tuesdays is a weekly bookish meme, hosted by MizB of Should Be Reading. Anyone can play along! Just do the following:"
• Grab your current read
• Open to a random page
• Share two (2) “teaser” sentences from somewhere on that page
• BE CAREFUL NOT TO INCLUDE SPOILERS! (make sure that what you share doesn’t give too much away! You don’t want to ruin the book.

Mark looked at me with eyes so remote they left me chilled.  "I'm sure." he said quietly, and sipped his drink."  page 93

From In A Fix by Linda Grimes.  I am only a few pages in but so far I like the book.

Snagging a marriage proposal for her client while on an all-expenses-paid vacation should be a simple job for Ciel Halligan, aura adaptor extraordinaire. A kind of human chameleon, she’s able to take on her clients’ appearances and slip seamlessly into their lives, solving any sticky problems they don’t want to deal with themselves. No fuss, no muss. Big paycheck.

This particular assignment is pretty enjoyable... that is, until Ciel’s island resort bungalow is blown to smithereens and her client’s about-to-be-fiancé is snatched by modern-day Vikings. For some reason, Ciel begins to suspect that getting the ring is going to be a tad more difficult than originally anticipated.

Going from romance to rescue requires some serious gear-shifting, as well as a little backup. Her best friend, Billy, and Mark, the CIA agent she’s been crushing on for years—both skilled adaptors—step in to help, but their priority is, annoyingly, keeping her safe. Before long, Ciel is dedicating more energy to escaping their watchful eyes than she is to saving her client’s intended.

Suddenly, facing down a horde of Vikings feels like the least of her problems."
Posted by JC Jones at 12:00 AM

This one sounds different! Glad you are enjoying it.
My teaser today is from Steeped in Evil.
http://mytime2read.blogspot.com/2014/03/tuesday-memes-march-5.html

Nice Teaser! I haven't heard of this one, so I'll have to check it out. Here is mine...
http://winterhavenbooks.blogspot.com/2014/03/teaser-tuesday-60-on-fence-by-kasie-west.html

This one sounds like an interesting story. I am always up for urban fantasy. My teasers this week are from Eyes Closed Tight by Peter Leonard and The Winner's Curse by Marie Rutkoski. Happy reading!

oh I like the tease. he's so sure of himself :)

So confident!
My Teaser

Sounds like a unique cast of characters. I've never heard of anyone with a career as a surrogate aura adaptor. Is that what you'd call Ciel?
My Teaser is from SPARE CHANGE.

I hope he lives up to his confidence. :-)