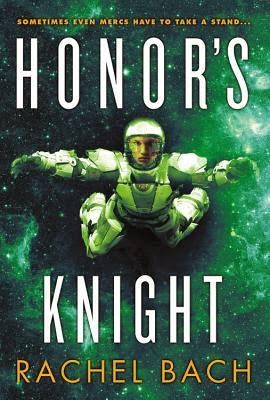 Devi Morris has a lot of problems. And not the fun, easy-to-shoot kind either.

After a mysterious attack left her short several memories and one partner, she's determined to keep her head down, do her job, and get on with her life. But even though Devi's not actually looking for it -- trouble keeps finding her. She sees things no one else can, the black stain on her hands is growing, and she is entangled with the cook she's supposed to hate.

But when a deadly crisis exposes far more of the truth than she bargained for, Devi discovers there's worse fates than being shot, and sometimes the only people you can trust are the ones who want you dead.
.
One of my complaints about Fortune’s Pawn (click to see my review) was that at the end of the book it just stopped.  I have a similar complaint about Honor’s Knight.  It just drops you in at the beginning and stops at the end.  It has been awhile since I read Fortune’s Pawn so I found that I was a very lost for the first few chapters.  I needed a reminder about some of the back story and it was not there.  The same was true of the world building.

Having said that once I got into the book the story line did come back.  Honor’s Knight brings back the same characters, secrets, and plot development.  There is a lot of action, most of it involving Devi.  There are secrets that are beginning to come out.  You can’t tell which side the characters are on.  They keep changing their mind about what and who they want to support.  All of that kept me reading.

This is the middle book in a trilogy and the action is setting everything up for book three.  Nothing is resolved and the book ends with a great deal left up in the air.  Honor’s Knight does move the story forward but leaves the characters in a lot of trouble.  I now have to wait for book three to see how everything plays out.

I received an ARC of Honor’s Knight from Netgalley.
Posted by JC Jones at 12:00 AM