Come Home to Me (Whiskey Creek #6) by Brenda Novak 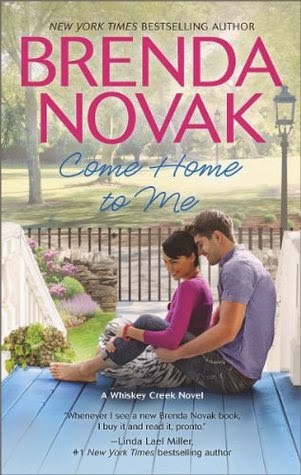 Home is where her heart is...

When Presley Christensen returns to Whiskey Creek with her little boy after two years away, she has completely changed her life. She's made peace with her past and overcome the negative behavior that resulted from her difficult childhood. Now she's back in the small town that was the closest thing to "home" she ever knew—the town where she can be with the sister who's her only family.

There's just one catch. Aaron Amos still lives in Whiskey Creek, at least until he moves to Reno to open a branch of the Amos brothers' auto body shop. And no matter how hard she's tried, Presley hasn't been able to get over him. Seeing him again makes the longing so much worse. But she hopes she can get through the next few months, because she can't fall back into his arms…or his bed. She's come too far to backslide now. And there's a secret she's been guarding—a secret she'll do anything to protect.

I have been hooked on the Whiskey Creek series from the first book so I was looking forward to Come Home to Me.  It is a good addition to the series.  It does break away for the Friday coffee group.  Neither Presley nor Aaron were ever a part of that group but both were side characters in previous books.

This is a nice romance with a touch of tension.   Aaron just can’t stay away from Presley when she returns to Whiskey Creek.  Presley cannot resist him even though she knows she should.  I did like how strong Presley has become and how much having a baby has changed her.  I wanted to hit Aaron on the side of the head for not realizing that his attraction was based on more than good sex.  It was plain he was in love with her but it took a long time for him to realize it.

Brenda Novak left a lot of hooks for future stories in Come Home to Me.  There are two people about to get out of prison, a new Amos stepmother, and a big secret for one happily married couple.  I will have to wait to see how this will show up in future books.

Harlequin MIRA published Come Home to Me by Brenda Novak in 2014.

I received an ARC of Come Home to Me from Netgalley.
Posted by JC Jones at 12:00 AM