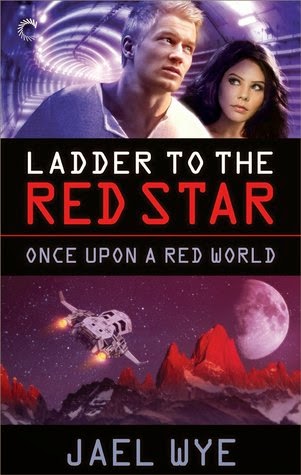 Once upon a ruined Earth 300 years in the future…

Jacques Tallinn, biotech smuggler and thief, is after the cure for a brain disorder he's suffered since childhood—a disorder inflicted by a powerful tyrant. To get the cure, Jacques will need to climb the space elevator to the new Zenith space station hovering above Earth and go undercover in the lab where it's produced.

Martian head tech Devi Chandra is immediately intrigued by her sexy new lab assistant. Though she insists on keeping things professional, she finds herself charmed by Jacques. Until he betrays her trust, kidnapping her and spiriting her off to Earth.

All Jacques needed to do was steal the biotech and get back home. But when things go wrong, he can't bring himself to leave Devi behind. Now she's injured and a simple caper has become an intergalactic cause, endangering his life and the lives of millions of others. But the hardest part? Winning back Devi's trust.

Set in space and on Earth the only thing Martian in the story are some of the characters and one of the corporations that holds joint ownership in the new Earth space elevator.

Ladder to the Red Star is a character driven story.  The two main characters are Devi Chandra and Jacques Tallinn.  I found both to be fascinating.

Jacques (from Earth) was used as a test subject as a young boy and left unable to feel any thing physical.  While he could not feel anything physical (pain, taste, etc.) he had enormous emotional feeling that almost overwhelmed him.  However if asked he would not recognize how many emotions he had.

Devi (from Mars) on the other hand had a wealth of physical experiences.  What she lacked were any strong emotional ties.  She had floated through life never bonding to anyone.  She felt restless but did not know why.

Before they met Jacques planned to use Devi to obtain the Correction process that would heal his inability to feel physical experiences and to cure his mother of cancer.  Not all of that plan worked.  All of that emotion that Jacques felt got in the way of using Devi and leaving her behind.

There was a very bad guy in the story.  He wanted to process Devi and was willing to go to any lengths to get her.  I did feel that he was a little over the top in badness but he provided a lot of the external tension in the story.

The internal tension was the interaction between Jacques and Devi.  Between the two Ladder to the Red Star was a very interesting story.

I really like the fact that Jael Wye does not rush the attraction between Jacques and Devi.  I could see the attraction and loved watching it build as the story progresses.

There is world building folded into the story.  The space elevator and the conditions on Earth are part of the plot and are developed as the story progresses.  Some of the characters from Ice Red are side characters.  Only one plays an important part and only near the end of the story.

Ladder to the Red Star works well as a stand-alone but like most books in a series reading Ice Red first will add to the enjoyment of the story.  If you have not read Ice Red leave a comment on today's guest post by Jael Wye for a chance to win an digital copy.

Carina Press released Ladder to the Red Star by Jael Wye in 2014.

I received an ARC of Ladder to the Red Star from Netgalley.