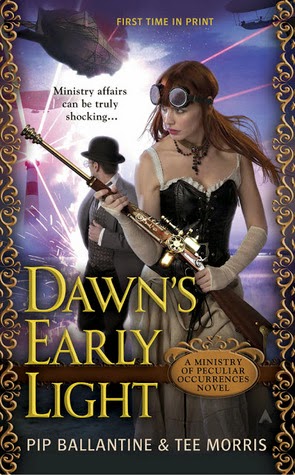 Working for the Ministry of Peculiar Occurrences, one sees innumerable technological wonders. But even veteran agents Braun and Books are unprepared for what the electrifying future holds…

After being ignominiously shipped out of England following their participation in the Janus affair, Braun and Books are ready to prove their worth as agents. But what starts as a simple mission in the States—intended to keep them out of trouble—suddenly turns into a scandalous and convoluted case that has connections reaching as far as Her Majesty the Queen.

Even with the help of two American agents from the Office of the Supernatural and the Metaphysical, Braun and Books have their work cut out for them as their chief suspect in a rash of nautical and aerial disasters is none other than Thomas Edison. Between the fantastic electric machines of Edison, the eccentricities of MoPO consultant Nikola Tesla, and the mysterious machinations of a new threat known only as the Maestro, they may find themselves in far worse danger than they ever have been in before.

I love Books And Braun and Dawn’s Early Light continues to showcase how different they are and how well they work together.  Ballantine and Morris threw in a new curve for the two in Dawn’s Early Light.  They have to go to America and work with two agents form the American Office of the Supernatural and the Metaphysical.  The American agents are the opposite of Books and Braun.  The male agent is a shoot from the seat of the pants person and the female is a librarian.  Watch for a little jealousy to play a part in the story.

Remember that kiss at the end of the last book.  Well it is also playing a part in the story.  Eliza want to know just what it meant but she is having a lot of trouble pinning Wellington down.  The scene where she finally gets him to talk is one of the best in the book.

Again there are several historical characters in the book.  Thomas Edison and Nikola Tesla are part of the story.  They are not at all how we think of them.  Same intellect but very different personalities.

Dawn’s Early Light sets up the next book in the series. .  Hold on to your hat for another wild ride.  Nothing is as it seems.  There is a very serious problem in the English government and the last chapter is full of surprises.

Ace published Dawn’s Early Light by Pip Ballantine and Tee Morris in 2014.
Posted by JC Jones at 12:00 AM