For Honor We Stand (Man of War #2) by H. Paul Honsinger 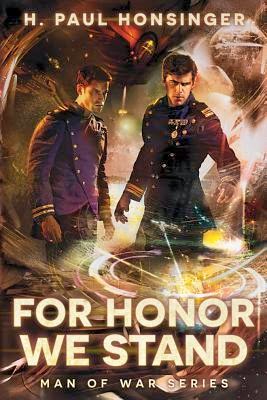 In 2315, the Earth Union is losing a thirty-year-long war with the Krag Hegemony.

Having encountered the Krag before, Space Commander Max Robicheaux now faces daunting challenges aboard the USS Cumberland: the dangers from the enemy without? and clashes with crew and superiors within.

Meanwhile, Doctor Sahin receives a coded message summoning him to a secret meeting which aims to forge an alliance that could change the balance of power in Known Space. But first, he must circumvent the fighter ships and heavily armed troops of the traitorous emir bent on killing him before he reaches the negotiating table.

Both men must call upon their developing skills and growing friendship to bear the burden of carrying between the Krag Hegemony and the Earth Union a fateful ultimatum and the shocking answer: an answer that could spell eternal slavery, or even extinction, for all humankind.

The second novel in the Man of War series, "For Honor We Stand" continues the galactic naval adventures of Robicheaux and Sahin.

Look for the same exciting writing and world building that was in book one.  There is action and danger with a large cast of characters.  Max Robicheaux and Dr. Sabin are back and still working together.  The crew of the Cumberland is still not fully up to date but they are working together much better.  While some of the themes are familiar they are given a new twist.

The plot is the same -  defeat the Krag.  It is fun to see how Max and his crew pull off the impossible again and again.  For Honor We Stand is very good Military Science Fiction.  If you are looking for action, a lot of space battles, interesting characters, different aliens and science that seems to work this is the book for you.  There is a nice twist at the end of the book that really sets up book three.

I am ready for book three but it is not listed yet.  I want it to hurry up and arrive.