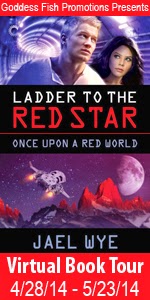 I was fascinated by the characters in Ladder to the Red Star and asked Jael Wye, the author,  to do a post on how she developed her characters.  But before we get to her post I want to thank her for taking the time to do the post and also tell you a little about  her.

Jael Wye grew up on the American Great Plains, went to school in the Midwest, and now lives in beautiful New England with her family and her enormous collection of houseplants. For more of Jael’s unique blend of futurism and fairy tale, don’t miss her ongoing series Once Upon A Red World.

Fairy tale characters are memorable because they are exquisitely simple. The princess is beautiful and good, the prince is handsome and brave, and the ogre is greedy and cruel. But archetypes in their primal form just won’t do when the fairy tale takes the form of a modern day science fiction romance novel.

My book, Ladder to the Red Star, is based on the tale of Jack and the beanstalk. The hero, Jacques, travels up the space elevator cable to a space station in orbit above the Earth to steal a valuable item from the station’s powerful owner. This action follows the map of the classic tale, but for Jacques and his quest to become real and immediate to the reader, the narrative needs to show that Jacques’s own unique backstory, personal emotions and ambitions are what motivate him to enact this mythic story. Jacques is driven to steal from his enemy out of a desperate need to find a medical cure for himself and his mother--reasons specific to him that make him sympathetic and believable to the reader.

But small touches matter almost as much as these broader strokes when it comes to writing a plausible inner life for a character. For example, Jacques is fond of watching soap operas, and this detail adds a quirky, approachable dimension to him that might otherwise be lacking.

Fully realized personality, history and motivation are the foundations of believable characters, but physical descriptions are also important to ground them firmly in the reader’s mind. For example, with Devi, the heroine, I went into detail about her coloring and the shapes of her body and face when she was first introduced, and then I scattered little reminders of her physical attributes throughout the book. These descriptive passages give her distinction just as much as the unfolding of her character.

Leave a comment for a chance to win a digital copy of Ice Red, book one, in the Once Upon a Red World Series.  Click on the title to see my review of Ice Red.  Be sure to leave yours email in the post so you can be notified if you win.  Visit the other blog hosts for additional chances to win.  You can read my review of Ladder to a Red Star if you scroll down to my next post.

Email ThisBlogThis!Share to TwitterShare to FacebookShare to Pinterest
Labels: Ice Red, Jael Wye, Ladder to the Red Sky, Once Upon a Red World Series