Sea Without a Shore (Lt Leary #10) by David Drake 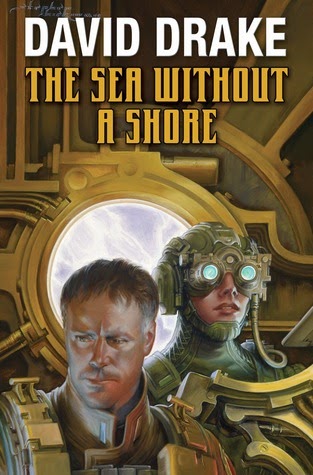 "LEARY AND MUNDY RETURN in the RCN SERIES.

Cinnabar's chief spymaster is a mother also--and her son is determined to search for treasure in the midst of a civil war. Who better to hold the boy's hand—and to take the blows directed at him—than Captain Daniel Leary, the Republic of Cinnabar Navy's troubleshooter, and his friend the cyberspy Adele Mundy?

The only thing certain in the struggle for control of the mining planet Corcyra is that the rival parties are more dangerous to their own allies than to their opponents. Daniel and Adele face kidnappers, hijackers, pirates and a death squad—even before they can get to their real business of ending the war on Corcyra. Only with planetary peace can the boy they're escorting get on with his mission.

The boy thinks the treasure he's looking for is a thousand years old. Daniel and Adele know that it's probably a dream—

But if the treasure is real, it just might be tens of thousands of years older than anyone imagines, and incalculably more valuable!"

Adele Mundy and Daniel Leary are back together again in another exciting adventure.  This time they each have a separate mission but instead of going their separate ways their mission takes them both to Corcyra, a planet in trouble.  Daniel is helping out Mistress Sand by accompanying her son to look for a treasure and Adele is doing a favor for Daniel’s sister and the Leary family.

This is a much more laid back book.  There are no space battles, their space ship is a freighter instead of a war ship and there are only 20 of the regular crew on the voyage.  We do see a lot more of Adele in this book and continue to get additional insights into her character.   Both Daniel and Adele have to work to outsmart their enemies and in many cases turn them into allies.

David Drake does try to write each book in the series to stand-alone but I recommend starting at the beginning with book one.  You will have a much better grip on the characters and the story.

Baen published Sea Without a Shore by David Drake in 2014.

I received an ARC of Sea Without a Shore from Netgalley.
Posted by JC Jones at 12:00 AM