Slow Train to Arcturus by Eric Flint and Dave Freer 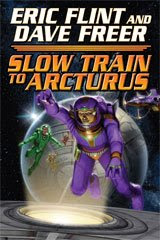 Science Fiction/Space Opera are in my Mixed Book Bag today.

In Slow Train to Arcturus Eric Flint and Dave Freer have written science fiction at its best. Man has decided to live in space not on planets. The space around Earth is filling up and man wants to move out to the stars. The journey to new stars is made on a slow train that accelerates and does not slow down. The slow train is a series of habitats strung together like beads on a necklace. As the train approaches a system a habitat is disconnected and slows down to reach its new home in a new solar system.

That takes care of the science to get from Earth (point A) to the new system (point B) but who goes and what happens in each habitat? Like the frontier of old it is the misfits that want to leave and each habitat has a different group with a reason to leave and never return. There is no communication between the habitats and as time passes strange changes take place. As the story opens the slow train is approaching a solar system where another intelligent species has developed. They decide to visit what they expect to be a dead artifact. Action and adventure, romance and drama, comedy and tragedy all result. This is a cliffhanger that keeps you reading. Pick up Slow Train to Arcturus and enjoy.

Baen published Slow Train to Arcturus in 2008. If you like to read e-Books go to the Baen web site and purchase the book there. For hardcover go to any bookstore.
Posted by JC Jones at 6:16 AM